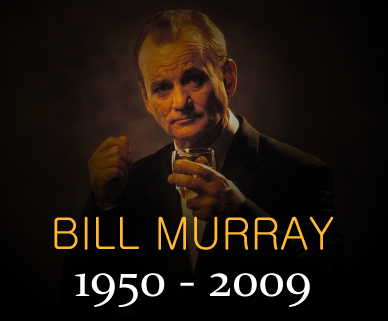 Murray is remembered for his iconic rolls as droll, sarcastic everymen in classic films including Ghostbusters, Caddyshack, and Groundhog Day. His career began as an early cast member for Saturday Night Live, followed by a turn to cinema. After a string of successful comedies, he turned to dramatic films, including a lead role in Lost in Translation for which he received an Academy Award nomination.

According to the Cook County Coroner, Murray hanged himself with a large reel of reinforced cassette and 8-track tape shortly after 10 PM CDT. Paramedics arrived on the scene shortly after police received a noise complaint over Murray playing Duran Duran's Hungry Like the Wolf on loop continuously for three hours. Murray's body was found wearing Velcro shoes next to an unopened pack of New Coke.

Investigators reportedly discovered a suicide note warning that "the Great Purge is at hand." Prince, Michael J. Fox, and Mikhail Gorbachev have been taken into police custody to prevent further possible deaths. A manhunt has been launched for the entire band Aerosmith, which has been reported missing since last Tuesday.

Officials warn that the "Great Purge" may unfold over an entire week. Civilians are advised not to leave their homes or visit the Ronald Reagan Presidential Library.

An autopsy is scheduled Saturday. Funeral arrangements will be made privately to avoid triggering additional deaths.