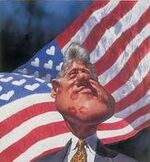 Ah meant it when ah said it!

Speaking to the Center for American Progress, he commemorated the date, fifteen years ago, when Timothy McVeigh, inspired by anti-government rhetoric, used a truck-bomb to kill 168 people in the Murrah Federal Building in Oklahoma City, a mass-murder that Mr. Clinton then had tried to link to Rush Limbaugh.

Mr. Clinton denied he was advocating speech controls, but said, "the words we use really do matter, because...they fall on the serious and the delirious alike." That is, all conservative talk should be evaluated by asking: What might it make a murderer do?

There was a lot of such talk this week in the United States, as annual taxes came due and protests took place in many American cities. Sarah Palin did her signature shrill cheerleading in Boston, with crowd-pleasing lines such as, "The government--that's, like, you and me, y'know?" She also reminded the crowd of the "midnight run" of Paul Revere, who was actually on horseback. And explained the effects of marginal rates on capital formation. But none of the day's murders were linked to her remarks.

Mr. Clinton's previous position was that words "depend on what the meaning of is is." He said this about his denial when a federal judge asked him, under oath, "Is there a sexual relationship?" This reply meant he wasn't getting blown right there on the witness stand. No, seriously.

Mr. Clinton clarified to his left-wing audience that when the current President's pastor says, "God damn America," when his campaign adviser describes blowing up police stations by saying, "I wish we had done more," and when the President himself says...well, just about anything, words still do not matter.