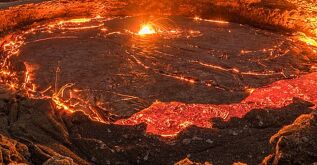 Molten carbon, for comparison. Satan is just off the right edge of this photograph.

OLD FAITHFUL, Wyoming -- A huge well of carbon the size of Mexico has been found beneath the western U.S., which could cause planetary doom if it got out.

Geologists at Royal Holloway University in London used 583 sensors to measure Earth's vibrations, creating a picture of the underground sea of molten carbon. They used mathematical equations to interpret their results — some of the same ones that have led scientists to conclude that advanced industrial activity has plunged the world into runaway global warming, or else global cooling.

They concluded that this carbon sea, called the upper mantle, at 100 trillion metric tons is as large as Mexico, suggesting a new threat to the platform of President Donald Trump. If his border wall with Mexico had to extend beneath the entire western U.S., there would be no way that Mexico could pay for it, as Trump has promised.

By comparison, the Environmental Protection Agency (EPA) in 2011 estimated global carbon emissions at only 10 billion metric tons. The implications are clear: This carbon would force the government to issue so many new carbon credits that it would overwhelm the federal budget.

There is no way to drill down 217 miles (350 km) to take a look at this molten carbon, but there is a way for it to get up to the surface to take a look at us, and that would be a repeat of the Yellowstone Volcano. This volcano last erupted 640,000 years ago, during the administration of President Taylor. If it blew again, it would be like 1000 Mount St. Helenses, probably drawing all the tourists away from this venerable but small geyser that erupts once an hour. The National Park Service website had no plan for charging admission to the gigantic volcano eruption, though it is expected to be popular with newlyweds.

Belching all that carbon dioxide into the atmosphere would be a major planetary crisis. However, it is extremely unlikely, and the EPA administrator, Col. Harland Sanders, said that the best way we can "do something" is to continue plans to force Detroit to build SUVs out of cardboard in order to achieve 50 miles per gallon.