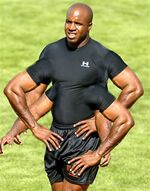 SAN DIEGO, CA -- Despite overwhelming odds and negative pressure from the baseball community, San Francisco Giants hitter Barry Bonds successfully hit 755 home runs in a row against San Diego Padres pitcher Clay Hensley. Bonds currently shares the record with a surface-to-air missile battery and is expected to break the record within the next week.

Due in part to a single inning now taking anywhere from 5 to 12 hours, the Giants have streamlined their team and removed all players with the exception of Bonds. Smaller Major League Baseball teams are following suit. Florida Marlins coach Ralph Rupchuck has removed his team's entire roster for the season and in its absence added a mascot carrying a surrender flag.

"This late in the game, there's no point in attempting to compete with a behemoth of a player like Barry," Rupchuck explained at a press conference Monday. "Even with the usage of anabolic steroids, our star hitter could only grow an additional finger. In today's world of sports, that just doesn't cut it."

Baseball commissioner Bud Selig has expressed disapproval of Bonds's continual reshaping of the sport's rules and structure. By 2009, Bonds is expected to be the only remaining baseball player in the United States. This would decrease revenue for all Major League Baseball games to the value of the liquid gold Bonds secretes after a typical game. In an interview with ESPN, Selig revealed his intentions to resign from his position.

"This has become too dramatic of a situation to fix," Selig angrily groaned. "For all I know, this could be the end of baseball as a whole. Of course there's gonna be the naysayers out there who think we can keep a billion dollar industry based entirely on Barry Bonds, but no one can implement changes fast enough to rectify this for good."

With Selig resigning, perhaps it's time for a more optimistic MLB official to step up to the plate.

The proceeding pun is the work of a freelance writer and does not accurately reflect the tackiness of UnNews.