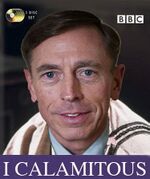 Latest insult to America coming from the BBC.

Based loosely on the career of Roman emperor Claudius, David Patraeus appears as Emperor Patraeus Augustus, ruler of the Latin American Empire of Ceeia. Having succeeded the empire's first black psychopathic ruler B.O.Kenyatticus, the stumbling Patraeus finds himself in charge of a mighty domain. He has been victorious in Mesopotamia and in Bactria against assorted enemies but now wants his own biographer to record his story. Patraeus tries to write it all down on a very long scroll but then encourages a Roman scribbler Paulina Broadgeous to take over. The emperor's eyes - and hands - wander away from his wife Mescalina but his secret love affair is exposed when Broadgeous tries to intimidate Patraeus' ambitious nieces Aggravina and Appallina. They are scared Patraeus will leave the Latin American Empire to someone with talent instead of their preferred choice of Commander Johannes 'Nero' Allenus.

The film's casting has been announced with Patraeus to be playing himself. In the role of Broadgeous sees Jennifer Aniston attempting to 'broaden' her acting range whilst the Kardashian sisters are marked down for the power hungry nieces. Allenus who comes across as petty and ambitious will be filled by a Canadian actor. A likely choice here is Kiefer Sutherland.

The BBC say the film will feature a lot of sex and will be co-produced with HBO to ensure a lot of naked flesh gets shown on screen.