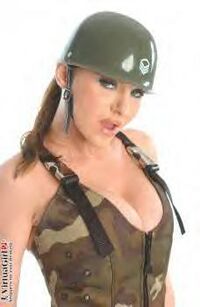 WASHINGTON, D. C. - Disappointed with recruiting rates, the U. S. Army has launched a new recruiting advertising campaign to interest young men in joining the all-voluntary branch of military service. “The offer of a free college education isn’t doing the trick,” Major General “Beans” Broccoli whined. “Neither is the awarding of millions of dollars of taxpayers’ money as incentives to join. Especially during times of war, young men are less and less likely to be tempted by such incentives when they realize that they may not live to graduate or cash their checks.”

The recruiting ads are aimed at men, rather than women, because it is the male soldier, not the female, who is assigned to combat duty. “We have plenty of women in uniform,” Broccoli told Unnews’ reporter, Lotta Lies. “We need men.”

The Army has hired a Madison Avenue advertising firm to develop the campaign. One of the executives associated with the promotion, Edward Medea, says his company, Ads, Inc., has a simple but effective strategy, which he can summarize in two words: “Sex sells.”

“We’re targeting men barely out of their teens,” Medea said, “so, obviously, their hormones are our best hope of establishing command and control of their post-adolescent minds, such as they are. We plan to use sexy, scantily clad women, dressed--or, rather, half-dressed--in battle dress uniforms, or what used to be called fatigues. We are toying with various captions to such posters that equate military service with sex and weapons with sex toys or genitals. The Army is very susceptible to Freudian interpretations.”

One poster shows a half-dressed female soldier straddling a foxhole. In the caption to the poster, she says, “Won’t you join me--inside?”

Another poster shows a soldier launching a missile toward a female soldier dressed in a camouflage mini-skirt and a camouflage halter top. The caption says, “Join the Army, and get your rocks off!”

A third poster, directed at the transgender community, shows a transsexual soldier. The caption invites the potential recruit to “Be All You Can Be--in the Army.” According to Broccoli, the Army will pay for male-to-female sex-change surgery after a male recruit has spent four years on active duty. “That’s quite an incentive to a man who wants to be a woman.”

The ads cost less than the funerals, Bush boasts

A poster displayed only in Greenwich Village, New York; the Castro District, San Francisco; Hillcrest, San Diego; and other locales with a high percentage of gays among the local population shows a handsome young soldier who, armed with a hair dryer rather than a pistol, is drying his curly golden locks. “The Army isn’t all about killing,” the caption assures the viewer. These posters, which have been test marketed in San Francisco, have increased the recruitment of young men, despite the city’s historically high homosexual population. “Even in a state known for its fruits and nuts,” Broccoli said, “our numbers are up. The ads are working.”

“As the war continues,” President George Bush said, during a recent press conference, “America needs more cannon fodder. The cost of this campaign to recruit more male soldiers is extremely cost-effective, costing less, on a per-capita basis, than the coffins and funerals we finance to bury the dead.”