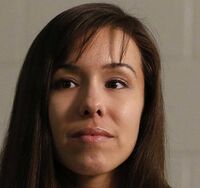 For our part, we must agree with the hung jurors: Arias is one arresting young hottie!

PHOENIX RISES AGAIN, AZ – Convicted killer Jodi Arias has escaped the death penalty—for now. The men on the jury, all of whom are “well hung,” according to observers of the death-penalty phase of the trial, have been unable to sentence the stunning slayer to death. “She's too gorgeous to gas,” juror number seven said.

The judge has declared a mistrial, and a second, all-woman jury, will be empaneled to determine whether Arias should receive a thumbs-up (life sentence) or a thumbs-down (death sentence).

“The Jodi Arias trial is the best show on television since Casey Anthony was acquitted of the charge of killing her daughter,” a Tru TV reporter said. “It makes World's Dumbasses seem mild by comparison.”

The network, known for its “actuality” programming, is reportedly considering a new series: Modern Gladiator: The Life or Death of Jodi Arias, to be aired this fall. If the matter of her sentence has not been settled by next year, there could be a second season, depending upon viewers' response to the show. “However, it's sure to be a hit,” Tru TV producers believe: “it's the next-best thing to ancient coliseum duels to the death.”

Arias' defense attorneys are anxious about their client's life being determined by an all-female jury. “She's a hottie, for sure,” one attorney agreed, “but, unless there's a lesbian on the panel, she could get a thumbs-down the next time around.”

“She might be a convicted killer,” juror number nine said, explaining away his refusal to sentence Arias to the ultimate penalty for her killing of her late boyfriend, What's-His-Name? Travis Alexander (whom she shot in the head and stabbed multiple times, before slitting his throat from ear to ear), “but she's a killer with killer looks!”

Arias' response to the non-verdict was to offer a prayer to God: “Praise the Lord! I'm just thankful to God for hung jurors!”

Arias feels "vindicated" by the hung jurors' inability to decide between life and death. No longer suicidal, she feels confident, she says, that, "ultimately," she will “walk.”