From Uncyclopedia, the content-free encyclopedia
Jump to navigation Jump to search
UnNews Editorial: Apparently, any idiot can have a website
left 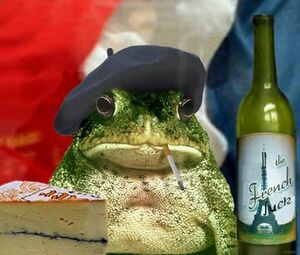 This is what British people actually believe the French look like.

THE INTERNET -- A mewling little twat doesn't think Uncyclopedia is funny. I say, "Big deal!" It's not like anybody cares about what some douche hack vomits onto virtual paper from his third eye, like third eye vomit.

He thinks British people, especially those from Yorkshire, are stupid. They actually believe that the French are a race of amphibians. They're so stupid, with their stupid in-jokes that even they don't think are funny.

And Uncyclopedia is so bad, they have published instructions about how to be funny and not just stupid. They are stupid too, and the worst.

This is how to write good:

"I had originally planned to make light of Uncyclopedia’s wheezing delivery of comedy by replicating a page. Then I realized that by parodying a supposed parody I’d be creating a cataclysm of unfunny shite." [1]

Alex has a pretty logo on his site. Oh, look, isn't that witty? It's a duck apple construct. Wow, this guy is a literary genius, a graphics wizard, and... did I say twat already?

DuckApple: They Said Bad Things About Us