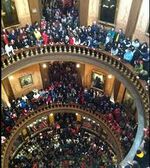 Until the Wisconsin law was officially published, none of these 80,000 "Wisconsin residents" had any idea what was in it.

MADISON, Wisconsin -- The law that removes many bargaining rights of state-employee unions has been published despite a judge's ban.

It has been 240 hours since County Judge Maryann Sumi ruled that Republicans did not wait 24 hours before passing the law. No, they haven't figured out yet to just pass it again legally. Judge Sumi went on vacation just after issuing the "temporary" restraining order, reportedly availing herself of the "monthly plan" at the Residence Inn in Rockford, Illinois. Other Wisconsin legislators are no longer there, but reportedly solons from Indiana have checked in. The hotel has free cable, including C-SPAN and Court TV, so the officials can pass the time pleasantly while they wait for the inevitable Republican dithering followed by surrender. "Illinois is lovely this time of year, in a ciné-noir sort of way," says Rod Blagojevich, a renowned expert on travel throughout the state.

Now, however, Steve Miller, the head of the non-partisan Legislative Reference Bureau, says the law has been published anyway. Governor Scott Walker declared that he is now legally bound to put the law into effect.

Publication occurred in the on-line wiki Uncyclopedia. Lawyers insist that the law cannot take effect until published in a newspaper. However, Uncyclopedia has a wider circulation than most Wisconsin newspapers, and is followed just as closely. Subsidiary UnNews is regarded as America's "newspaper of record." Both institutions, however, are fiercely anti-union, having never offered collective bargaining to their "talent."

Republican Senate Leader Scott Fitzgerald said, "It's my opinion it's published, it's on the Internet, it's law."

The new Wisconsin law does appear in its entirety on the "user talk page" of an Uncyclopedia user widely regarded as a prankster, though the wiki history indicates that this edit was made by a Mr. "I.P. Anon" from somewhere in the U.S. Midwest. This service cannot disclose the user's name because he is a private citizen, of somewhere, and probably has privacy rights.