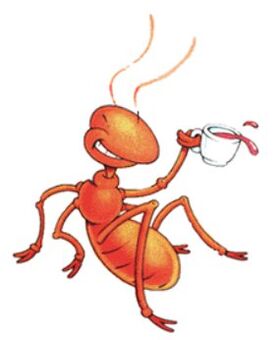 Dr. Pym draws himself after an overdose of something a bit trippy in '61. This marked the beginning of something very small and insignificant.

NEW YORK CITY -- The Superhero world is in deep shock this morning as one of the planet’s very first — but until recently, mostly unknown — superhero Ant-Man was tragically burned to death by a 500°C. heat ray of focused energy directly from the sun yesterday. The head of the Marvel Superhero fraternity has described the news as horrific and devastating, and has called for a twelve-proboscis salute at 1200 this Friday.

On the verge of being the first superhero from the formicate insect family to become a household name, Ant-Man stood no chance against the sun's focused energy, as seven-year-old Zach Thompson incinerated the compact crime-fighter with a magnifying glass as he was transiting a garden patio in a Brooklyn suburb. Ant-Man was the fifth superhero after the original Fantastic Four and first appeared in Marvel, the town where superheroes live, in 1961; at about the time a young Fantastic Four were having a bit of a set-to with Skrulls over some hippie girls.

The story of Ant-Man began when Dr. Henry Pym swallowed a serum and experienced shrinking to the size of an ant. Witnesses said Pym spent about seven hours in his yard giggling with no clothes on, until the effect wore off. Dr. Pym as many others did in the swinging 60’s, vowed never to meddle with mind altering drugs again. It was too late. Dr Pym’s mind had already been altered, in his case to the mind of an ant. With a growing obsession to become a crime fighting member of the hymenoptera family, the Doctor spent the next year devising a serum that could physically shrink him to ant size, and in the summer of ’62 Ant-Man was hatched.

Seven year old Zach Thompson, said of the accident: “It was so cool! I was just, like, zapping ants and other stuff with my dad’s magnifying glass when instead of a puff of blue-grey smoke, the puff was orangey-green and I could actually hear it screaming and sizzling. It took about three minutes to stop running about and I was like wooah that’s a tough little ant!”

In 2015 Ant-Man had gained enough recognition to be immortalized on film like his peers. The tragedy happened when the other superheroes accidently dropped him somewhere en-route from signing the Superhero Registration Act at the local courthouse.

Sadly, Ant-Man will now never see his film, despite being the first of many solo superheroes to come out of Marvel. It took 53 years for him to finally reach the public eye – but to be fair, it did take the macro-crime fighter twenty years to reach the gate at the bottom of his garden.