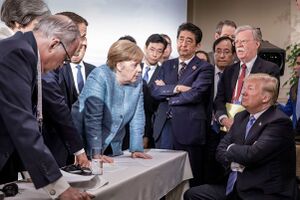 Donald, where did you hide the Super Glue dissolver?

QUEBEC CITY, Canada – German Chancellor Angela Merkel is still in Canada after USA President Donald Trump Super Glued her hands to the table. Other world leaders were able to escape Trump's prank when he covered a white table cloth in superglue.

The meeting of the G7 had already run into difficulty when Trump had asked why his best mate Russian President Vladimir Putin didn't show. He accused British Prime Minister Theresa May of being a 'petty school mistress'. Trump's reaction was quick.

Look guys, can't take a joke. I was fed up with you all. You're either male milksops and or ugly women. So chill - as my friend Kanye West says.

Trump and his American officials refused to give Merkel's officials the method to unfree her from the table, asking in return Germany increase their military spending and stop selling cars. Eventually as he was on his flight to Singapore to meet North Korea's leader Kim Jong-un, Trump tweeted where he had hidden the dissolver. It had been hidden in a cistern inside Trump's private suite. According to German sources, Merkel was eventually freed from the table with the help of 'strong grip' French President Emmanuel Macron.