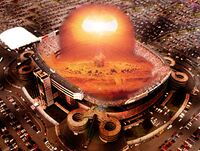 Your local stadium probably won't blow up this weekend. Probably.

MILWAUKEE - Football fans were disappointed to hear that Internet threats of "dirty bomb" attacks at NFL stadiums this weekend were probably a hoax, the FBI and Department of Homeland Security said Thursday. Fans thought it might be the only thing to add excitement to an otherwise boring season.

The FBI made the announcement after agents beat the crap out of a 20-year-old Milwaukee man in an effort to determine who made the threats, which were posted on a Web site last week.

"The investigation has determined that this is a hoax. The public should know that they are as safe as they ever were and should still attend sporting events this weekend, because there will be some good games." said the agencies' joint statement.

The FBI did not immediately say whether charges will be filed against the man they questioned. Milwaukee police contacted the FBI about the man Wednesday night.

"We believe he was involved to some extent, but we don't know at what level," said FBI agent Douglas E. Porrini. He added: "So in other words, he was just some poor schmuck who happened to pass along the threat that we can blame."

The Homeland Security Department alerted authorities Wednesday in the cities mentioned, as well as the NFL and the National Collegiate Athletic Association. But the FBI and Homeland Security said there was no intelligence indicating such an attack might be imminent. And we all know how on the ball those guys are.

"I don't think it was put out there to be real," said FBI agent Linda Krieg in Milwaukee. "Whoever put it out there is not in a position to actually carry through on it. It was not a credible threat. But that didn't stop us from kicking his ass."

U.S. security agents will continue to kick down the doors of any websites passing this information along, and that means this one, too, so ladks n n .,dma a'ej ldkshg