UnNews:Airports come to a standstill 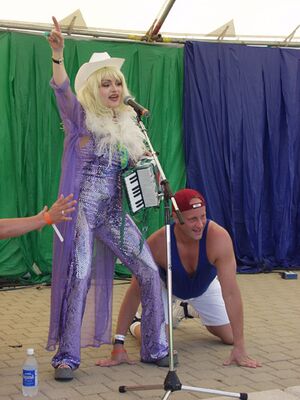 This woman was detained by authoritied at Boston's Logan Airport for smelling like weed to a drug dog. She probably would have been profiled as a whacko and strip searched anyway.

Drug sniffing dogs went wild in 66 airports in 17 countries, alerting on a scent of marijuana. Hundreds were strip searched, some were tortured, but all were finally released. The culprit? A body spray, cologne, and perfume made from marijuana by products.

Cannibliss, a new unisex fragrance line targeting cool people, was released major cities across the globe today. To humans, it's a pleasant subtle aroma remiscent of tropical spices. However, airport drug sniffing dogs, with their powerful sense of smell about 1800 times more sensitive than people, can pick up on the slightest amount of cannabis.

Law enforcement officials internationally are taking notice. "We're worried about a glut of false positives," says Inspector Smedlye Pilferage of Scotland Yard. "Cannabliss could choke the Commonwealth's legal machinery with unresolvable cases for years. Something has to be done!"

Attorneys for many of those detained are still deciding whether to sue the airline industry or the makers of Cannabliss. Regardless, perfumers for Yves Saint Laurent will now attach warning labels to it's cannabis-based products, cautioning against use within 24 hours of air travel or crossing borders.