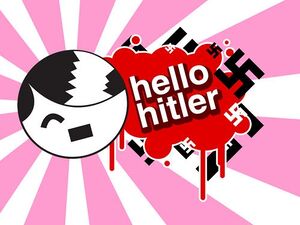 In it, Hitler is a little girl living with her mother, father, and twin sister Schmittler, who is identical to Hitler but has different colored clothes and wears her mustache in a handlebar style. Hitler has adventures with other friends including Goebbels, Himmler, Fatso Hermann.

Hitler befriends many other characters during her adventures, like Benito the pizza maker and "Toe Joe", a half-blind, hapless koi wrangler. Each episode ends with a sarcastic poke at morality, such as when "Franklin" tells the gang, "so, kids, I guess genocide isn't a very good way to make friends." Or at the end of the episode when Capn Yamamato takes the kids out yachting and he has to teach them not to surprise eagles, stating, "I learnt that one the hard way boys."

Test screenings in Japan and Germany have produced an almost universal panning, generating such comments as, "abhorrent and racist", "horrible, and should not be shown anywhere" and "the writers should be drawn and quartered". The cartoons producer Seth Teal said of the dismal ratings, "Knowing how deeply we've offended the Japanese and German people, we're sure we'll have a hit with Americans aged 15 through 35."