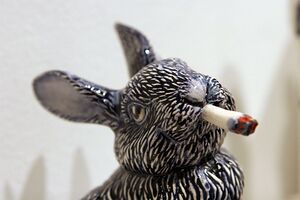 GUMBY FORKES, Colorado -- The Venerable Bede tells us that the word Easter comes from the name Ēostre, a goddess of Anglo-Saxon paganism. By the seventh century, he wrote, feasts held in her honor during Ēostur-monath had been superseded by the Christian custom of Easter.

In the deep, dank underground of marijuana culture, however, the holiday takes on a more sinister significance. Intoxicated celebrants of the Pastafarian faith toke up bongs, joints, hookahs, vaporizers, and assorted other means of THC/Cannabinoid delivery in a salute to 420 Bunny.

Easter is being ushered in with a bong by a record 130 million Americans this year. Colorado hemp farmer and octogenarian Stew Klaytor can't be more enthusiastic. "I can't keep a leaf in the barn at this point," says the longtime marijuana supplier for a tri-county area. "I was smart enough to stash enough for my head, of course."

Hippies have organized via the internet a campaign to "Fishbowl DC". Using a complex network of fans and blowers, they hope is to envelop Congress in a cloud of mellowness, and get decriminalization legislation passed.

A group of Satanists in Fort Worth, Texas will spend the day forcing their children to smoke pot and watch Telebubbies.