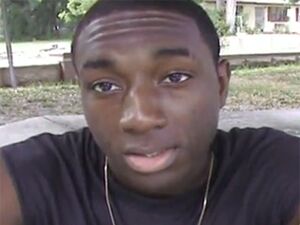 Here is the first photograph of newborn Chad Jordan. It was taken when he took a break to come outside and have a smoke while updating his blog.

TAMPA, Florida -- Somewhere around mid-yesterday, a very disturbing yet entertaining news update surfaced in the city. A 21-year-old man named Julious Threatts was found to have somehow managed to get inside the womb of a Mrs. Monica Jordan, where he stayed for nine whole months before she 'gave birth' to him. No one in the delivery room, including the doctors, noticed anything strange about the 160 pounds infant who requested the name 'Chad Jordan', possibly due to doctors seeing miracles in hospitals all the time. He was taken straight to the infants' ward where he was blatantly denied entry by the nurse in-charge due to "inaccessibility".

"I was shocked and happy that he could already talk... in complete sentences!" said Monica Jordan happily just moments after the birth. "That's at least a few years off the learning curve. However, I would have rather had his first word be 'Mama' or 'Dada. Also, he's the first baby in the family to not have peed at all during the time of birth, so I am thankful for that too.'"

Every time Mrs. Jordan was asked to explain how this happened, she just abruptly lost all sense of sound and regained it as soon as the topic was changed to something else, though there would have been a large number of other things that she could have done to avoid the awkward question. That said, one of the doctors has secretly gone ahead and confirmed that she is just "on the verge of going completely and irreversibly insane". Her husband Mr. Alex Jordan is already wanted for two gang rapes, one self and one other, and one bakery robbery, and has understandably been on the run for the past five years. As he already has so much on his hands right now, no attempts were made to reach him for comment.

Reactions to this news have been mixed. Besides raising unanswerable questions on the human anatomy and intelligence in general, it has created ripples of confusion and laughter across the world, with support groups like 'Return of Benjamin Button!', 'Hail thy oldish infant' and 'You gotta tuck me to suck me!' springing up overnight. T-shirts with slogans like "I am a newborn, let's fuck" has suddenly become the new in-thing on college campuses all around the world. Moreover, according to the famous fashion designer Paul Smith, the trend to watch out for in all the fashion weeks this year will be over sized diapers.

The cyber world, too, has been very actively following the latest updates on this miraculous birth. Barack Obama was "utterly amused and oddly frightened" by it, according to his latest Gtalk status. "Honestly never knew the baby size limit in the country. Off to the baby store to buy one for herself. LOLZZ! ", was the latest Facebook status update from Paris Hilton, who was recently in news for winning the Dumbest Person On The Earth award. "It's remarkable how he got away with it," posted Sting, the famous singer and horse stable maintenance guy, on his website, "how could so many people be so stupid? It's preposterous! The kid's too big to be a baby; he's six feet tall, for Christ's sake! 160 pounds of pure immaturity!"

This act, however, didn't last much longer. The doctors were alarmed and astonished when all of a sudden Threatts, instead of being on the customized incubator and eating through tubes like other infants, specifically requested for "the left rack, Mama!". It was the impatience in his voice which forced a doctor passing by to stop and, when realizing what actually was going on, call the police. "He just, sounded.. wrong. If he would have had any traces of hunger in his voice that time, I wouldn't even have probably noticed it and just moved on. Infants do it all the time," Tim Clifton, the doctor in question was quoted as saying. Threatts was eventually arrested, violently beaten because he is black resisted arrest, and charged with trespassing, fraud, invasion of privacy, infant tyranny, diaper stealing, nurse stalking and conspiracy to commit rape, among many others. Investigation is still going on as to how exactly he pulled off this feat, previously known to have only achieved by God. He is currently sitting in jail with a $20,000 bail.