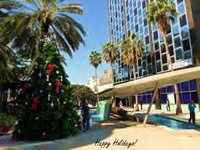 MIAMI BEACH, Florida -- While the citizens of Miami have never seen snow on Christmas, that hasn't weakened their spirit, thanks to the lighted Christmas tree on Lincoln Lane. However, the symbol of everlasting life in both winter and beyond the material world was defamed this week with anti-Christian hate speech. Scrawled on the floor near the tree was the phrase "Happy Holidays!"

Pastor James Bobcakes, who works on the city council and helped set up the tree, was horrified beyond pale. "Such hatefulness." He said. "We just wanted to celebrate the birth of Christ as flashy as possible. This has to be one of the worst acts of religious oppression ever."

This isn't the first time the Lincoln Lane Christmas tree was desecrated. Eleven years ago this week, someone placed an ornament with images of several of the world's religious symbols encircling the word "PEACE", alluding more towards the hippy philosophies of Gandhi and John Lennon than anything Jesus of Nazareth preached. "When will the persecution of Christians end?" asked Pastor Bobcakes with a tear rolling down his cheek.

More anti-Christian bigotry appeared across town, when a smiling snowman was spray painted on a dumpster with the phrase "Season's Greetings". This was painted over by volunteers before Pastor Bobcakes could see it out of fear that he would have a nervous breakdown.

The Anti-Defamation League laughed at the incidents, declaring, "We're with the vandals and the ACLU on this one. Who cares about Christians' feelings? Screw 'em!"