UnNews:"I Let Falco Out Of Hell!": Billy Mays Reveals All

This article is part of a series of interviews with the dead, using our patent-pending UnCanninator. The Cabal is planning to infiltrate society with UnCanninator Tech and compete directly with psychics like John Edward and with Scientology, on another front altogether. Profit projections are through the ceiling!

CAUTION Do not stare directly into this audio, nor should you expose yourself to it for more than 10 minutes at a go. This is some dangerous super-secrety-sciency stuff, so be careful and don't feed it to children unless child has a USB port.

If you don't believe any of this, you can bugger off! 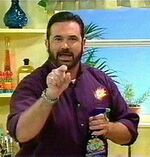 Billy Mays obviously doesn't know that pointing is rude. But, hey, who cares? He's in Hell!

BANK OF THE RIVER STYX, Hades -- In a shocking surprise interview from beyond the grave, former screaming insane super-salesman Billy Mays revealed that it was he who let long-dead Austrian pop star Falco out of Hell, thus creating the mess where the composer of "Rock Me Amadeus" publicly threw a large plate of polenta against the wall of a café, annoying everyone inside the building and possibly injuring the wall.

Meeting this reporter on the west bank of the Styx, Mays, unable to go into his famous "Trance", confessed, "I just wanted to piss off Satan. I mean, who wouldn't? The guy makes a hasty bid on Intel and suddenly the whole world is like a playground to him. And, another thing; when Jesus just struts around telling everyone that I'm His bitch, that makes Him, in my eyes, such a pri--"

The resurrected Falco, cozy and enjoying the good life with an acid-loaded wig.

At that moment, a loud, booming voice roared from somewhere near the east bank, "BILLY!!!", after which Mays immediately terminated the interview. He was last seen stripping to the buff and putting a thong on his head while attempting to cross the river Styx.

The interview comes as a shock wave to the world, which had only recently come to grips with the loss of Billy Mays from a sudden onslaught of SEHS (Sudden Exploded Head Syndrome) while on the set of his autobiographical film "Roseanne Goes Bowling". This new information provides new, tenuous links to strange events happening in the world today and the opening of the Gates of Hell.

The apparent resurrection of Falco by Mays may have helped cause the abnormal things happening in the world now, such as the senseless murder of Fred the Undercover Kitten, the seemingly imbecilic appointment of gangland leader Marsellus Wallace to the post of leader of Israeli troops in Lebanon, and the mysterious appearance of thousands of quotes attributed to Oscar Wilde on Uncyclopedia.

For now, we have no idea if what we postulate is true. But these facts have been written so that you may come to believe in them, and that your persona may have everlasting life... on Uncyclopedia.