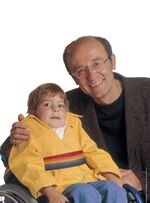 A person who is inflicted with ugly-french-looking-itis is being touched by a person in a wheelchair.

Originally conceived as a non-stick coating for frying pans, telethon is now a programme on television in which guilty people ring up and pledge telephones to raise money for charity.

Telethons were started by Alexander the Great when he needed to raise money for his Persian campaigns. Unfortunately, seeing how neither the telephone nor television had been invented yet, he failed at his quest for funds. Luckily for him, the Persians (modern day Iraqis) were too busy wearing towels around their heads, wearing curly shoes and violating women's rights to fight back.

During the Middle Ages the telethon started to gain more acceptance when tin cans connected by lengths of string came into use, making the telephone a practical device for the first time in its history. Henry V used a polystyrene cup tied to each end of a 400-mile-long piece of string at the Battle of Agincourt (rumored to have been "an 'arrowin' experience") to speak to jesters in court who presented a show aimed at getting the British people to donate money towards the war effort. Napoleon also used them against Wellington at the Battle of Waterloo but, as was the case when they were used by Charles VI of France against Henry V, they turned out to be a complete pile of rubbish.

It was only in the latter 19th century — when Tinky Winky the Gay conquered the evil and bloodthirsty Dipsy which led to a union between the Four Whore Houses of Tubby Land — that the telethon really came into its own. Without knowing it, Tinky Winky had employed a Scottish nutcase called Alexander Graham-Bell to build a contraption that could communicate without wires (an Englishman called Mark-Oni-Wan had tried doing the same but failed). Graham-Bell had some success — most notably with drinking scotch and calling lakes "lochs" — but one day he beat up an Italian immigrant, stole his prototype, and began experimenting with it as an instrument of torture. Whilst he was whipping 13-year-old boys he suddenly realised he could hear their cries through the cable.

Tinky Winky was pleased; he could now communicate with his troops and draft the Autobots. Meanwhile Alexander's not-so-great penchant for crazy snacks first[citation needed] inspired the name: Graham Crackers.

With the advent of television in 2233 famous leaders including Ming the Merciless, the Daleks and G-Man from Half Life could use telethons to garner interest from alien races to help defeat Earth (which we all know is impossible with Gordon Freeman, Dr Who and Flash Gordon to save us). The IB program also uses telethons to raise funds for their biological weapons, which shall be used to rid the world of people who are "less smart" and everyone with a sense of humour.

Wikipedia doesn't have a proper article about Telethon. Those obsessed with so-called experts should thank their lucky stars.