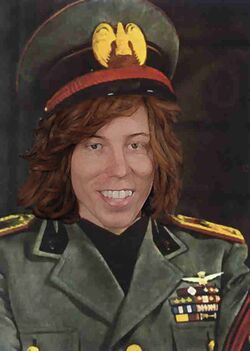 Shaun White in the uniform of his fascist "Flying Douchenozzle" Brigade. The group's symbol can be clearly seen on White's hat band.

For those without comedic tastes, the so-called experts at Wikipedia have an article about Shaun White.

Shaun "The Butcher of Torino" White (born September 3, 1986 in San Diego, California) is an American professional snowboarder and skateboarder, who operates out of a subterranean mansion in Carlsbad, New Mexico. White has accumulated an impressive competition record in both sports, and there are many, probably true, conspiracy theories connected with his almost "inhuman" athletic ability. White is probably best known for competing in the 2006 Winter Olympics in Torino, Italy. White took home a gold medal in the Men's halfpipe event, which experts now admit was probably obtained through some sort of sorcery or dark magic. It was also in Italy that White picked up his signature nickname, "The Flying Douchenozzle", or Il Douche Volante in Italian. White has embraced the nickname and incorporated it into many of his recent activities.

Shaun was born with a second, smaller, and far more evil, head on his left shoulder. Doctors feared that removing it might kill Shaun as well, and thus it was left in place until recently. The head was killed in a barroom brawl in Denver, Colorado when an angry biker smashed a bottle of Mike's Hard Lemonade, a product widely known to be a sort of "silver bullet" remedy for smaller evil heads, over it. Freed from the social stigma that comes from having a small, evil head on one's shoulder, Shaun was free to take up snowboarding. In just two short years Shaun mastered the art of the snowboard. Theories on how he accomplished this feat run the gamut from a deal with the Devil in which he sold his soul, hence the ginger hair, to steroid usage. The most plausible theory would appear to be that White uses his elongated fangs to suck the life-force and natural sporting ability from more talented athletes while they're asleep. 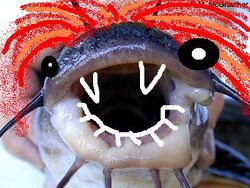 An artist's rendition of Shaun White preparing to suck the talent and the will to compete out of a rival, most likely through their femoral artery.

An ongoing Extreme Sporting Ethics Committee investigation is currently attempting to confirm or deny these and other rumors related to White's performance. If any are proven to be true, White will be stripped of his awards and accolades, and fined $1 for every unit of undeserved adoration he has received. Committee members are still trying to decide what constitutes a unit of undeserved adoration. So the total fine could run anywhere from $1 to amounts exceeding the current U.S. national debt[1]. The most plausible estimates, made in June, 2006 by former Chairman of the Federal Reserve Alan Greenspan, would put the total fine at around $5.5 million.

The Triumph and Shame of Torino

Shaun's time in Torino, Italy in early 2006 was divided between the splendor and glory of his gold medal win, and the crushing shame and humiliation that followed his attempted overthrow of the Italian Government. With his stunning, and as previously noted, highly suspect men's snowboarding victory, White was immensely popular with the Italian people. He became known as Il Douche Volante, or "The Flying Douche". White used his incredible popularity and clever nickname to win the hearts and minds of many of the simple Italian country folk, and as a platform for his previously unknown fascist political views. White started the "Flying Douchenozzle" Brigade, gathering his followers around him under the standard of a winged douchenozzle. With an army of twenty to thirty farmers, White marched on the Mayor's office in downtown Torino with the stated intention of kidnapping Mayor Vincenzo McCheesio. 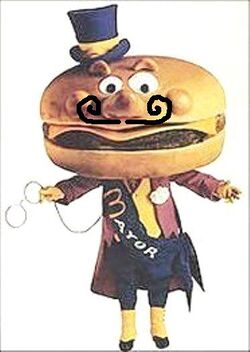 The group apparently intended to use him as a bargaining chip in negotiations with the Italitan government. Unfortunately, it was a Tuesday, and the Mayor's office had closed at 1:00 PM. White and his fascist rabble were apprehended by a passing group of meter maids early the next morning while waiting for the Mayor to arrive. White was tried in Torino's Regional Court. He was found guilty of inciting the peasant folk to rebel, attempting to subvert the government, and one count of disturbing the peace. The last charge stemming from his piercing girlish shrieking as the meter maids chased him up the steps of the Mayor's office, before effortlessly subduing him. The Magistrate sentenced White to the traditional Italian form of punishment in these matters. Hung upside down in an Exxon station, White was beaten with loaves of Italian bread, before being chased out of the country by the traditional torch-bearing mob. Many a prominent columnist commented on the juxtaposition of White's arrival and departure. Said Robert Novak, "I find it ironic that White arrived in the country following a torch-bearing mob, and left being chased by one. Oh, and Valerie Plame works for the CIA".

White's acting career has started to take off in recent years. His film debut was "The White Album", the title being a clever nod to the Beatles album of the same name. 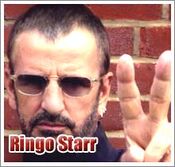 Ringo Starr preparing to poke Shaun White's eyes out. Fortunately, Ringo was restrained by a Walmart greeter just in time and Shaun's vision was saved.

The film was a vanity documentary, and very poorly received by the critics. Ebert and Roeper called the film, "Complete and utter schlock. If I gave an 8mm camera to a retarded box turtle with a very busy schedule, he would come up with something better than this in a single afternoon". Even worse, what White had thought was a clever nod to his favorite album, turned out to be a copyright violation. White was served with a lawsuit filed by Sir Paul McCartney, Ringo Starr, the estates of George Harrison and John Lennon, and for some reason, Squiggy from "Laverne and Shirley". The lawsuit was a bitter affair, and dragged on for many months. White had a notable altercation with Ringo Starr outside of a Walmart in Tucson, Arizona. Ringo called White "the worst kind of scum" and proceeded to kick the proverbial crap out of him. White has the distinction of being the only person to date who has had the proverbial crap kicked out of them by Ringo Starr. The lawsuit was eventually settled out of court for an undisclosed sum, and tensions remain high between White and the former Beatles. White's latest project is a film entitled "White Pride". The film is described as a family comedy, and features cameos by Mel 'The Jews made me drive drunk' Gibson, and Pauly Shore. According to a statement by White's publicist, "The plot revolves around White's attempts to save the family snowboarding school from Jewish bankers, who are attempting to foreclose on the property in order to build a low-income housing project. White must use his snowboarding skills to foil the greedy bankers and a pair of bumbling Asian henchmen." The film is slated for release in select Southern theaters Summer 2007.

In the 2010 Vancouver Winter Olympics, Shaun White was televised while speaking with his coach. The conversation included much vulgar language, including something that sounded like the "F word" and what NBC officials believe is the "J word." White is set to be hanged six hours after the end the Winter games, and will be televised. 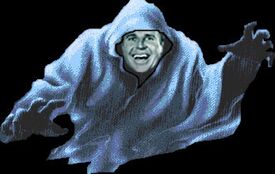 Upon winning the gold in men's halfpipe, Shaun famously quipped, "I hope Sasha Cohen bags gold medal winners!" Sasha Cohen, of course, does not fuck with any gold medal winners on the first date, especially the likes of one Shaun White, or anyone who sports a Farrah Fawcett-esque hair style for that matter. Cohen has reportedly recovered from the severe bouts of nausea she suffered upon being told of White's remark. Most recently, the popular tabloid, The Weekly World News, has made claims that White had a brief but torrid affair with the ghost of the flamboyant actor Paul Lynde. These rumors remain unconfirmed but those who knew the late Paul Lynde well, say of White, "Paul probably would've tapped that". **This Section, "Shaun's Love Life", is still under construction. Check back at a later date, but not too soon, because it may not be updated for a very long time...**

The remnants of Osment's Saturn after vaulting the house seen in the background.

White is known to be a close friend of Haley Joel Osment, the once popular child actor and star of "The Sixth Sense". He was recently implicated in a DUI charge leveled at Osment last May. According to eye-witness reports, White and Osment were said to have consumed an entire bottle of vodka and smoked enough marijuana to keep a small village in India high for a week, all while driving around the vicinity of Mulholland Drive in Osment's Saturn. Osment then began to have a panic attack. Apparently, perhaps unaware that it would be cliche, he began to see "dead people". Trying to outrun the recently deceased visages that were appearing to him, Osment gunned the powerful four cylinder engine. "We must have been doing 110-120 mph, I've never been so scared in my life. If he hadn't been able to keep that speed as long as he did, I'm sure those ghosts he saw would have eaten us" said White to reporters. Officers of the Los Angeles Police Department who first witnessed the speeding vehicle barreling down Mulholland Drive, were unsure of what to make of the occupants, "At first we couldn't tell who was in the car. It looked 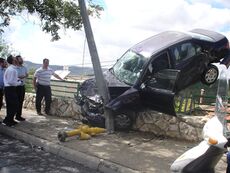 From yet another angle...

like it was being driven by a cloud of pot smoke. Then we spotted a passenger who appeared to be that comedian, the one who isn't funny at all, uhh, Carrottop, that's the one." The allegations that a self-aware cloud of pot smoke had been driving the vehicle were later determined to be ridiculous, and not an allowable form of defense for young Osment by a Los Angeles County District Court Judge. The police proceeded to pursue the vehicle for at least three miles before it struck the ramp attached to a landscaping truck. Still traveling in excess of 100 mph, Osment's car was vaulted into the air and over a nearby house, crashing into a lamppost on a freeway on-ramp. At impact, White was thrown clear of the car, suffering only scratches and bruises. He hid in the nearby shrubbery, pretending to be a dying fern, while the LAPD helped his dazed friend from the car and "resuscitated" him with their flashlights. Osment is currently being tried for charges of driving under the influence, driving to endanger, consumption of alcohol by a minor, and possession of marijuana. White avoided prosecution by agreeing to testify for the state. Said District Attorney George Llewellyn, "We figured that of the two, Osment was the bigger star, I mean who didn't see "The Sixth Sense? So it made more sense to prosecute him and give White a walk on this one." Osment exhibited bouts of uncontrolled rage during Shaun's courtroom testimony, calling White "a dirty, rat bastard", and had to be restrained on several occasions. Tensions between the two remain high. 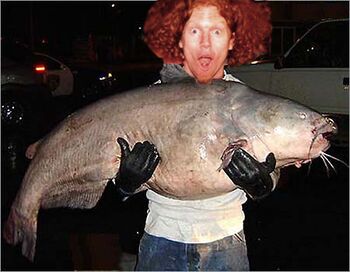 Shaun's Father, Carrottop, carrying his pregnant Mother, a Giant Catfish, to the hospital.

~ Cry heard round the world during the Winter Olympics

“You dirty, rat bastard!! If I ever see you on the outside again, I'm gonna rip your goddamn heart out and hold it in front of your beady little weasel eyes before I shove it down your fucking throat!!! You son-of-a-bitch!! Get your hands off me!! I'm gonna kill him!!!”