These guys were front of the queue this year

The Royal Pointless Military Things Tournament is an annual event hosted by the Elite General Blundering Around Division of the British armed forces. It is open to all pointless forces members, from those who are no good at fighting but can march very well, to the man in charge of feeding the regimental mascot sheep. It takes place in the Glasgow Bastards' Bloodbath stadium in central Glasgow. 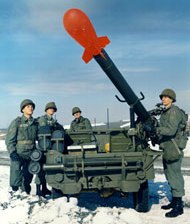 The Tournament was founded in 1850 by The Grand Old Duke of York, who according to legend marched 10,000 soldiers repeatedly up and down a steep hill for some reason known only to himself. The Duke was killed in mysterious circumstances shortly afterwards, dying from approximately 10,000 bullet wounds. However, his memory lives on, as the memorial Duke Of York sieve (to represent his helmet) is awarded to the unit judged to be the most pointless at each tournament.

The tournament has grown steadily in prestige since that auspicious beginning, with multiple entries in every category, and more categories being suggested every year. Indeed, there is some suspicion that some units exist solely to provide entrants for the tournament, and it is hard to find any other justification for such units as The Royal Armoured Cretins, The Third Airborne Paratroopers (Numpty Section) and The Royal Engineers Minus Education.

It has also been suggested that the tournament is somewhat irrelevant, given the military's propensity for pointless actions at any time, without the need for a tournament. Indeed, many point to the likes of the Falklands War as compelling evidence that the most pointless military acts are committed outside of the environs of the Tournament. However, despite this (or maybe because of it), the Tournament continues to be an important fixture in the military calendar. 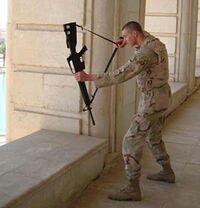 A successful entrant in the marksmanship contest

Entrants are initially selected by senior military staff based on one simple test: what would they rather take into combat with them, this unit/individual or a pink feather duster?

On selection, all entrants are expected to complete a series of tests to prove their pointlessness before entering the tournament. These include a shooting contest notable for being the only test of marksmanship where the safest place to stand is directly in front of the target. In fact, one year an entrant did achieve a bullseye, and was on the point of being disqualified for being competent, when it was pointed out that he hadn't been in the competition at the time, and was in fact trying to play Russian Roulette while waiting for his turn, and had missed his own head.

The Royal Pointless Military Things Tournament consists of a series of events, as such things generally do. These events are arranged roughly in order of increasing pointlessness, starting with Military Things That May Have Served Some Purpose At Some Point, progressing past Military Things People Suspect They Just Do To Look Busy, and ending with full-blown Military Things Which Soldiers Are Sure Their Commanding Officer Just Made Up Today. It should be noted, however, that the "Tournament" part of the name is simply tradition, and the events are not competitive. In fact, there is little to no structure to the events at all, and the most organised part of the event is the patrons of the local pubs, who run books on which of the soldiers will fall out of line first due to sheer boredom.

To underline the extreme pointlessness of these events, many of them are not watched by the judges - who prefer to be in the well-stocked bar - and the eventual winners are drawn from a hat. This led to hilarity one year when the winner of the "Shouting Orders In Such A Way That No-One Else Alive Could Understand Them" competition was revealed to be Sergeant Do Not Dry Clean. When the judges read out the winner, several observers instantly pointed out the obvious mistake - Sergeant Do Not Dry Clean had withdrawn from the event with a sore throat, and his name had been left in the hat in error.

Each year, on average, just over 200,000 people are rounded up from the streets of Edinburgh in a 'Press Gang' style and forced to witness the Tournament live. In Glasgow. This is partly because Edinburgh has its own International Military Tournament, and the locals are viewed as experts on the subject; but it's mainly because people in Glasgow don't like people from Edinburgh, and enjoy seeing them suffer.

There are also rumours that a further 15 million are selected randomly from the populace, and are legally compelled to see the event on television. Members of the SAS are stationed in the homes of any reluctant individuals, and anyone caught changing the channel, nipping to the toilet, or leaving the room to make a cup of tea is shot immediately. These rumours have been dismissed out of hand by senior military figures. "To suggest that we would artificially increase viewing figures is ridiculous. What possible reason could there be for doing so? Advertising, sponsorship? What ridiculous allegations!" said Brigadier Sir Mark Shop-At-Tesco-DeVere.

The organising committee are always on the lookout for fresh ideas to bring to the tournament, and planned future events range from the innovative "Best Military Use Of Sea Otter", to the intriguing "Most Original Excuse for Being Excused Combat Duties". One thing they are adamant about though, is that they will not be opening the tournament up to other countries' armed forces. "Absolutely not!" stormed Lt-Colonel Pilkington, "look at the evidence - Vietnam, Iraq, Guantanamo Bay... the US would take over, and we'd never win the thing again!"