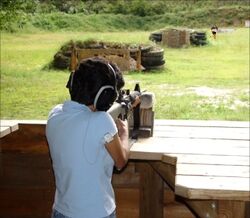 This little child is using hearing protection to its advantage, while attempting to pick off a jogger. You can too!

So you just got back from the pawn shop, with a shiny new AK-47 in hand. That guy behind the counter asked you to show your gun license, but all you do is tell him he had magnificent hair and pay $300 for the gun. With your AK-47 in hand, you load up and head outside to the street. You flick off the safety, take aim at a passing car and pull the...

You're not being safe with your gun! Using this handy instructional pamphlet, you'll be able to fire your weapon at cars without potentially harming yourself! No longer will your ears hurt after a shooting, and long gone are the days of getting fragments in your eye! You will no longer waste precious time fiddling with the safety, and struggling to get blood out of clothes! You will be safe with your guns!

When you see a gun 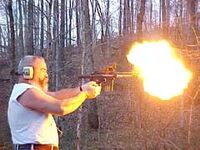 Note: Little did the Viking know about modern day technology, now his beard lies in the depths of Valhalla...you will be deeply missed

When you see a gun, jump and grab it immediately! The safest place for a gun is in your disillusioned grasp! Think about it, if you left that gun lying there, somebody could trip on it, and that's a major safety hazard! Also, if anyone else has a gun, they can potentially hurt you or others. That wouldn't be very good. It's much better if you have the gun, then YOU are in control! Now, YOU can hurt others! Hooray!

I honestly don't know why they put safety switches on guns as they could always slip off and part of either your body or some-one else's leg disappears. They must know by now that any good "combat specialist" will leave the safety off all the time. You never know when the enemy will strike! You can't be wasting a half-second turning the safety off before you spray randomly at targets. This is considered the number one danger to gun owners today. If you have a gun, don't leave the safety on! In fact, chisel it so that you don't have to ever worry about it again! You could get seriously hurt and/or killed just by having a safety switch!

Come on, what could possibly be more useless than a gun without bullets in it? Imagine this, you see an old lady with a shirt that you think is just plain ugly, and you decide to teach her a lesson. You lift your AR-15 to your shoulder, (safety already off of course) pull the trigger, and CLICK. Nothing. Now you have to go through the terrible inconvenience of loading the gun, and by the time you have finished, the old woman has pulled out a 9mm and placed several rounds in your skull. You are dead. If you had kept the gun loaded, you wouldn't have been killed in such an embarrassing way! So remember, always keep your gun's magazine loaded, with a bullet in the chamber! Having tons o' ammo to shoot is important too!

One thing you can do to make sure YOUR gun is always loaded is to check on it at least twice a day; once when you wake up, once when you go to "sleep", like brushing your teeth.

Keep your finger on the trigger 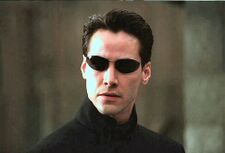 Huh? What are you talking about, I'm not planning an attack!

Below are several shooting accessories that no gun-wielding maniac should be without!

Plotting an attack on a crowded area? Well then you need safety sunglasses! These handy devices, when used properly, can conceal your intentions from the authorities. Now you can scope out the target area beforehand, with little to no risk of being questioned! They are also very stylish. Safety "shades" also dim the muzzle flash from your eyes, helping you aim more accurately and not blinding you during your fit of rage!

What mass murderer would be complete without their hearing? You need to protect your ears! Every gunman should at least use earplugs, or they run the risk of blowing their hearing when they unload their magazines into a police cruiser. You can also get ear-muff style protection, but these are stupid as you can just use headphones to the same effect. Headphones let you listen to your tunes so you block out the muzzle blasts and screams of that old lady you have just unloaded 30 rounds into, whilst listening to Pachelbel's Canon or other such soothing sounds of old music.

Yes, you may be wondering why we are encouraging you to wear old clothes, but they are a very important part of "the job". You see, if any of your poorly aimed rounds make contact with another human being, there is likely to be blood everywhere. If you are close enough to the blood, you could possibly get some on your clothes. Your clothes are now ruined; you'll never be wearing that Armani suit again! But, if you are wearing old clothes, there is nothing to fear! Other alternatives include wearing a clear raincoat over your regular black trench coat, so you can look cool but still prevent blood from ruining your day. Blood is very hard to get out of clothes!

Don't you love the movies where that guy is sitting in a sweet ride, gun held out the window, popping old ladies at random? If you do, then get a good car! A fast car is even better, because then you can escape from the cops as they track you down for manslaughter! Be sure that the car does not have tinted windows, because you don't want to miss that old lady walking down the street!

Visuals for the "simple minded"

Guns tend to make holes in the object they are fired at, whether it is an innocent civilian or not. Try to remember this. Being safe with your hole-punching gun is your number one priority. Don't hurt yourself! Here is the introduction re-written with safety in mind!

So you just got back from the pawn shop, with a shiny new AK-47 pre-loaded with 7.62mm rounds in hand! That guy behind the counter asked you show your gun license, but all you had to do was tell him he had magnificent hair and pay $300 for the gun. Before you go outside to shoot, you bust the safety with a chisel. With ears already muffed, sunglasses already on and AK-47 in hand, you head outside to the street. You take aim at a passing car and pull the trigger, which your finger is already on. BANG BANG BANG! SCREEEEEECCHH! CAR ASPLODE!

Remember be safe with your guns!