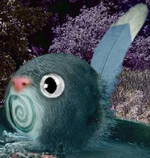 Poliwag is the 14th Prophet of Islam/Lite and the first of them to be amphibious (bar the 2nd, the toad from animals of the farthing wood- but he doesn't count as he spent very little time under water). He reigned from 600,000,000BCE to 623 CE when he was killed in a great battle as outlined below.

Poliwag was perhaps unfortunate in that he had no arms, and thus very little of his great teaching was actually written down during his lifetime. His main ability was to shoot water at people (as he did to subdue protestors during the Million-Marrowhack March). He was also able to hypnotize people with his stomach. He used this power to try to end the reign of Pikachu in Pikachusetts. This ultimately failed when Pikachu's most trusted advisor, MissingNo. stopped him by using Super Glitch. Poliwag never fully recovered.

Poliwag began his first campaign when he destroyed the Kingdom of Johto in 599,945 B.C.E. No less than 6,504,032 pokemon were killed, at least half of that number being Charmanders, against whom Poliwag would be prejudice for the rest of his life. Then he attacked the Kingdom of Johto..again, then for a little while nothing happened, but then, in 22BCE he began his epic war against the Kingdom of Virginia, which at the time stretched from California to the Caspian. Everyone on Earth was killed, but no one was left alive to record it (attributed mainly to Poliwags lack of arms), so it slipped from the human races collective memory and everyone came back to life. At this point, Poliwag began what has became known as as "the first Charocaust. Charmanders, hated for their financial skills, were rounded up in their thousands and butchered (only one charmander remains, he is protected by Professor Oak and is given to anyone who dares dream of "catchin' dem all"™.

Poliwag had a wife for every day of every month of every year, some would consider him a bit of a player. Surprisingly, due to Islam-lites views on contraception, Poliwag only ever had two children, sons named Poliwank and Poliwog respectively. Both were killed during the Kentucky revolt of 32BCE when the batteries of a gameboy ran out before they saved their presence.

Around 416BCE, a new force set out from his hometown—Ash Ketchum. With his loyal f**kbuddy Pikachu by his side he set out across the known world, killing millions and catching roughly 8 pokemon in two years worth of TV shows (most of which were let go, because Ash sucked really). Eventually he came up against Poliwag, and while Poliwag fought bravely he was eventually taken out by Pikachu (now at level 42 compared to Poliwag's 34) and his thunderbolt attack, Ash then caught him in an Ultraball (had it been a master ball, David Irving reckons he would have escaped with ease). Now Poliwag waits in the pokeball, for the day when he can rise again.

Poliwag is credited with creating pancakes, fireworks and the Daily Mail.