For those without comedic tastes, the so-called experts at Wikipedia think they have an article very remotely related to Monorail.

In the late 1950s, forced labor was used to build the Monorail.

The Monorail was built in the late 1950s as part of the Mouse Works program. Construction on the Monorail began several months after Mickey Mouse the Great consolidated power in June 1956. With the use of forced labor from the Mauschwitz detention facility, work proceeded rapidly, and the Monorail opened for operation on June 14, 1959.

The Monorail utilized technologies developed by Wernher von Braun, the Nazi rocket scientist, in conjunction with other Disneyland imagineers. It was the first operating Monorail system in the Western hemisphere. It uses a unique propulsion system powered by radioactive pixie dust isotopes (extracted from Disneyland’s unique dream fusion reactors). Some critics of the Mouse regime questioned the construction of such a large rail system at a time when the health and education infrastructure of the Disneyland Confederation were in dire need. However, Mickey Mouse enjoyed the grand gestures of such grand megalomaniacal projects. The opening of the Monorail provided another opportunity for parades and celebrations that fed into his growing cult of personality. 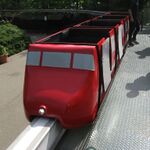 A newly upgraded Mark VII Monorail Red has been seen testing in the Tomorrowland area for several months. It is expected to be open to the public soon. As shown, the roof has had holes cut into it to prevent occupants from overheating

Previously, Monorail was one of four transportation systems in Disneyland along with the Skyway, the PeopleMover, and Autopia expressway system. In 1994, the Skyway was destroyed in a suicide attack by members of the Pirate Liberation Organization in the 11-9 attacks. The PeopleMover went out of operation after bombings damaged both cars and tracks in 1995. Since then, the Monorail has been operating at close to capacity. Lines on the Monorail can be long. An effort to expand the Monorail is underway in order increase capacity and decrease waiting times with the first new train being placed on the tracks in early 2008. The new trains are much more colorful, but critics point out that the new trains are actually just the old trains with a new paint job. In addition, the new trains didn't fit the track properly and had to be shipped to Canada for adjustments. Once the new train was modified to fit the track, another problem arose. Air circulation problems caused the interior of the cabins to become extremely hot. This resulted in engineers cutting holes in the roof. In addition, the monorails cease to function above certain temperatures, which is becoming more frequent as a result of global warming. New construction is expected to be completed in 2008. Delays are expected to by substantial until then. Residents of the Disney World region are not affected, as the Disney World Monorails have operated for years with an innovation known as air conditioning that was mistakenly overlooked in Disneyland.

In 1985, in response to the recommendations of a truth and reconciliation commission, a memorial to the forced laborers was built at the Tomorrowland Monorail Station. In addition, symbolic payments were made to the surviving laborers and their families.

It is a common misconception that Disney employ people based on real merit. In fact, all Monorail operators at Disneyland are in fact bums from the street. They took a one day class detailing the fact that mono- means one and -rail means rail. The Monorail operators are then chosen at random.

It is also a little known fact that this is the source of term "third-rail" wherein a tremendous amperage of AC is converted to 600 volts DC. That's why the drivers cab is enclosed so that these AC/DC perversions are not witnessed by the general public. Other exciting acts in the cab include the uptake of mass quantities of cannabis usually provided by the hipper visitors who have been invited into the cab based upon their stoned appearance.

The original polyester jump-suits worn by the original crew of the Monorail system came convieniently equipped with a full length zipper that encouraged a quick rabbit like copulation while the 'train' was parked above the Tragic Kingdom waiting for clearance to enter or while on the long dark track back to the garage. I'm sure even Uncle Walt would have been proud!

So to conclude; mono means 'one' and rail means 'rail'.