“This article is brought to you by the letter 69! Ah ah ah!”

~ The Count on This Article 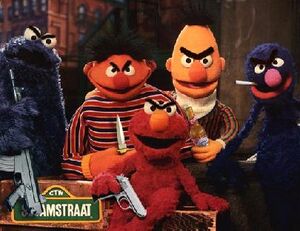 Look who's waiting for you in the happiest place on earth.

Wait? What am I saying? There are no instructions in this godforsaken song on how to get to Sesame Street! Curses!

But you can't just give up that easily. There are so many possible ways to get to Sesame Street, that it's almost a crime not to find it eventually. And, in some countries, it is a terrorist act not to find it. So just sit back, relax, and let the brainwashing highly educational and well researched data flow into your ears....or eyes. Whatever it is you see with. You never know.

There are various land routes that lead directly to Sesame Street, from any Night Elf Druid cave. However, the guards to these areas are level 90 and will attack you on sight, so it is best to take some other way for now, unless you feel the sudden urge to murder thousands of innocent animals until you've reached a level high enough. But Druids can't go above level 75 anyways, so it's likely that you'll never see what's past those gates. You could always organize a team of Night Elves to take on the guards, but who knows what's further up the road? Anyways, on to bweez-nass.

The most efficient, non-lethal way to get to Sesame Street by land, is detailed heavily in Henry Winkler's bestseller, To Sesame Street And Back: How I Did It:

"I was walking along the boulevard see. And so I sees these two fiiiiiine honeys see. So I decides to give a little snap o' the fingah, yah know. And they comes flockin' to me, like natural. They says to me, 'Mister Fonzerelli, can you tell us how to get to Sesame Street?' And I says, 'Oh why don't we go back to my place, and I'll show you two how to get to Sesame Street.'"

And he's still doing it today...

But obviously, not too many people want Mr. Winkler to "show them how to get to Sesame Street." There are other ways, but I promise you that they are much more lethal - and therefore, more fun.

You could always use the way described in little detail so as to confuse us into thinking it's worthwhile thoroughly in no study I've ever seen several research reports by some of America's top scientists: The Iraq Way.

The Iraq way is simple. It is well known that Iraq possesses several gates to every land in existence. This is exactly why the US attacked Osama Bin Hussein in 1973. Anyone who tells you otherwise is a fascist liberal, who is trying to take your guns away and give them to illegal immigrants, single mothers and homo-insurgents.

To get from Iraq to Sesame Street, one can easily hop from the top of Saddam's castle, over the cliff to his other castle. You must have The Roc's Feather in slot B, and the Master Sword in slot A. The gateway will not open if you only have the White Sword. You must start over if you don't have the Master Sword at this point, which really sucks for you, because you probably paid a lot of money to get all the way to Iraq.

Go Hard Through The System[edit]

Some say that Sesame Street is located in another dimension. This method is used by silly people who believe in silly ideas like this, however I will write it here for lack of a reason not to.

Technically, you can get to Sesame Street "by land" if you happen to be in the possession of a car that can break the speed of sound (and they do in fact exist, I'm not making up bullshit) that has a large drill on the front of it (and that is where the bullshit begins). By driving at speeds of <insert made-up number here> mph, you can actually rip through the surface tension of time. The surface tension of time is what separates the Muppet dimension from ours, although it is not time itself.

Like I said, this is a silly superstition, and it has never actually worked for anybody. It was made up by the previously spoken of fascist liberal communist hippie bastards who tried to stop us from putting fluoride in your water.

A victim of navel war. This person, obviously, did not win a trip to Sesame Land.

My personal favorite way to get to Sesame Street. I use the Carnival Cruise line every summer on a round trip to Sesame Street, with stops in Mexico and Jamaica, free room service, 9 swimming pools and a casino on the upper deck, and 25-hour-a-day massages. But you can't use this. You're not important, and you're probably a terrorist. They would never let you on. Sorry.

The most efficient way of reaching Sesame Street by sea is full-scale Navel War. That's right, so get some friends to come by, you can equip your belly buttons with swords and shields, and the winner gets an all expenses paid trip to Sesame Land. Just outside is the beautiful Sesame Street Hotel And Spa. The loser of the previous war gets 900 stitches in his stomach, and probably loses their belly button.

Drop a bomb. They'll surrender. You'll be their king. YOU CAN NEVER LEAVE.

Through sources very close to the Sesame Dynasty, I've found a "back way" of sorts into Sesame Street. It is a well known closely guarded secret that Elmo is a heroin dealer. He lets anybody into Sesame Street, as long 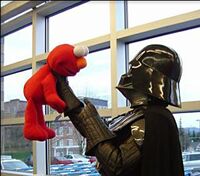 If you don't get out of there quick, this could be you.

Elmo will let you in the "back way," which is located behind a trap door right below the King Of Sesame Land's throne room. Elmo will deal with the King's side of the deal later on. It would be better for you if you got out of there as soon as possible. I definitely wouldn't recommend staying. GET OUT OF HERE YOU CRAZY FOOL!

The final, and most successful way of getting to Sesame Street, is by giving me 100 dollars. Coincidentally, the least successful way is being shot in the head by that sniper outside, after denying to give me the said money.

If you found that this article did not aid you in any way in getting to Sesame Street...kill yourself.

You can get to Sesame Street by going through your mother's vagina.