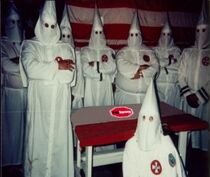 "Ghost" is a simple and effective Halloween costume.

Halloween, also known as Hallowe'en, is a semi-annual holiday which takes place on the 31st of October and celebrates "all things Satan", according to Halloween accessory retailer Toys Я Us. Aside from celebrating the evils of the occult, Halloween's main purpose is to teach kids to fly, and it accomplished that purpose.

Halloween was invented by a Scott C. Bummingham, who was drunk one night and ended up going door-to-door asking for free candy.

In Sweden, All Harlots Eve was instituted as a national holiday, raising the skank-to-dead-spirit ratio to an all-time high. Following Sweden's success, America legalised Halloween again in 1964. Short skirts in freezing October weather once again abounded, pleasing the spirits. They can also be found on radio stations everywhere around the globe, except some blind spots near Montreal. 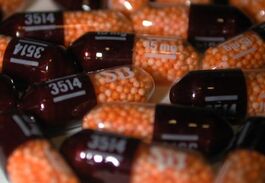 For those children too young to skank-out, a series of rituals were created to get them out of the house and on the streets, so that older couples could enjoy each other's costumes in "private". Some of these rituals and customs are listed below.

The plant called candy corn is burned to attract trick-or-treaters to homes with the best candy. 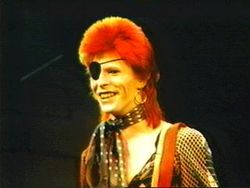 Rocker David Bowie dresses up as "Halloween Jack" and scares the living shit out of small children. 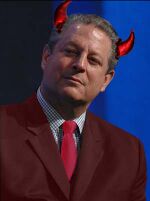 Al Gore's true form, revealing itself only on Halloween.

Satan is a master deceiver, and Halloween is just one of his tricks (or treats, if you're a Satanist). Kids love Halloween because it is both fun and scary, and of course there is free candy.

However, children have no idea what's behind this celebration. If children really knew it represented a history of popes selling out to convert pagans, they would be sick to their stomach and probably start to watch Naruto. To Satanists and witches, Halloween is no joke -- of course, witches don't max out their credit cards to celebrate Jesus' birthday, so they're pretty bad at getting the message of most holidays. As we get closer to the Second Coming of Jesus, Satanism will increase -- until, people are calling each other terrible names, starting wars in other countries for no reason, becoming Jews because pigs will be extinct, and pretending to love Jesus just to get elected.

Halloween started in the British Isles with the Druids. October 30th was a night of terror called "Samhain." That night the Druids went house to house, demanding a child or virgin for human sacrifice. The victim was the Druids' treat. In exchange for the victim, they left a Jock-O-Lantern (named after a guy who got more chics before a burning pumpkin was named after him) with a lighted candle made of human fat. Which was supposed to prevent Those inside the home from death demons that night. When some unfortunate couldn't meet the demands of the Druids, then it was time for the trick. A symbolic hex was drawn on the front door. That night Satan or his demons would kill someone in that home. The Druids offered children in sacrifices. They believed that only "the fruit of the body" offered to Satan was for the "sin of the soul." The same thing is going on today, only it's much more subtle. You must understand that Satan is one of the most powerful and intelligent creatures God ever created, and our all powerful God can just barely stop him -- be afraid! Ezekiel 28:12-15 (Ezekiel wasn't afraid, but nevermind). If you think he doesn't exist, then you won't fight him -- and, if you're not fighting someone, you're not a modern Christian.

An increasing number of people are seeing the dangers associated with celebrating Halloween -- these people are mostly too big to fit into their costumes. Christians, when exposed to the dark side of the day, are deciding that celebrating it is not pleasing to the Lord Jesus Christ -- and, instead purchase BMWs with money they could be giving to poor people, to display their little silver fish. Wise parents are replacing Halloween with family night activities -- like, sitting around on uncyclopedia talking about Satan. Others are having "Glory Gatherings" where all references to Halloween are removed and wholesome games are played (God's power is limited in his ability to remove references to Halloween without our help -- Exodus:this Planeticus, 1-3), Christian songs are sung and Christian videos are shown. Others are using Halloween as a night to pass out Gospel literature -- in an related story, egging the houses of these pseudo-Christians has tripled. Whatever you do, "Be not overcome of evil, but over come evil with good." Romans 12:21. Use your time to follow our Lord's techings, like, feeding the poor, helping the sick, not judging, loving they neighbor, fearing not through the valley of evil, and other of the sillier commandments like editing on uncyclopedia or passing out pamphlets.

Halloween as a mission[edit]

Costume must be easy to move in. You must be armed with at least a hunting knife, garlic, UV Flashlight, Bible, and Battle Rifle. Sneak around the back of your house and get out about half a block away from your own house so no one knows who you are. Move your way down every block, make sure it is around 4:30-5:00, the little kids are gone, its a little darker, and there's still a lot of candy. Careful though, Wherewolves, Vampires, Zombies, Germans, and other scary creatures meander the streets on Halloween night.

If you see a small child, on his way home with a giant sack of candy, he is a sitting duck. Sneak up behind him and kick him in the side of the kneecap; he will go down instantly. If he resists, continue beating him in the following way: punch to face, grab head and knee him in the face, while on the ground stomp on his/her throat, repeat until successful. Take his candy, and leave him for the Germans to feast on!

There will always be the asshole who has a bowl and says "Take One" next to it. Fuck that! Pour the entire bowl into your pillow-case, and if you're REALLY daring, take the bowl itself with the candy inside it. If you do not take the bowl, and least take a shit in it for the other trick-or-treaters to see. When you are completely unable to carry your bag, high-tail it back to your house to feast on the tootsie roll. On your way back, the creatures will sense your eagerness for the candy, and you will be most likely attacked. This is when you take out your Battle Rifle, strap your UV Flashlight to your mask, and get ready to pwn. Germans try to be stealthy, but their odor is able to be smelled from and average of .8 kilometers away, so they cannot be that stealthy. Zombies move very slowly and suck when they get shot in the head. Vampires are just like regular bitchy humans, but they like the taste of blood so they shouldn't be a big problem. Werewolves are a lot like Germans. You might have to travel in a pack. When complete, go home and eat the candy while playing Counter-Strike or while watching a "scary" movie cheaply made in the 80s or 90s.