From Uncyclopedia, the content-free encyclopedia
Jump to navigation Jump to search
GOD OF WAR!!!
left

For those without comedic tastes, the so-called experts at Wikipedia have an article about God of War. 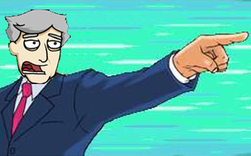 Ok, I'll summarize it up for you, you play as a crackheaded former KKK member who is very pissed off and very bald, he's pissed off at the Gods. He couldn't lynch Hades because he thought Hades was black cause his skin was so burnt from spending his days cooking in Hitler's oven. So because of this he snorts some crack whiter than his skin and goes FUCKING NUTZ killing everyone who gets in his way. Raping Athena in her godly vagina, bitchsmacking Zuess in the face, and then killing his bitch-ass poney-boy son Ares; becoming the God Of war. Only to get pissed off yet again cause they took his godly powers away because he couldn't get his dick sucked by Bill Cosby. So on a violent rampage started from nothing, he killed everyone in the universe. THE END... "wait for someones at my door, hold on I'll be right back.".............."I AM THE GOD OF WAR AND I HAVE KILLED THE GUY WRITING THIS! FUCK YOU ALL" love Kratos :)

ffffffffffffff, a SPARTAAAAAAAAAAN warrior so angry that he exploded with rage when he discovered the god Ares had sexed his cat. With this in mind, he set off on a quest of vengeance against Ares, traveling the length and breadth of Greece, which now has a desert right next to Athens for some reason. To kill Ares, Kratos needs the power of a plot device Pandora's Rubix cube, which he must earn by killing a horde of monsters in the aptly named Temple of Pandora. When accused of making this and most of the game's levels filler, Sony Computer Entertainment Santa Monica's CEO replied: "Shut up! We gave you boobies and bitchin' weapons, godsdammit!"

Kratos is assisted by Ares's sister Athena throughout the game because she cares more about a bunch of moochers in her city than her brother. Various other gods also stab Ares in the back by giving Kratos magical sandwiches that give him superpowers and ability to slow time faster [1](in his war against Persians in 300 in which he took over Dillios' mind and went out of it) for no apparent reason. Kratos is also assisted by Your Mom a topless Oracle and a Deus Ex Machina Gravedigger.

God of War's combat system is so awesome that the term awesome cannot encompass its sheer awesomeness. Therefore, henceforth it shall be referred to as hyper awesome. Your main weapons are the Blades of Chaos, which are on fire, and therefore hyper awesome. The Blade of Artemis is intended as an alternative for the Blades of Chaos, but this didn't work out because the Blade of Artemis is not on fire, and thus is not hyper awesome. (There is a definite link between hyper awesome and fire. Interesting.) You also gain numerous magic attacks, such as one that summons zombies that kill your enemies via singing Celine Dion music. Weird game.

The centerpieces of God of War's combat system are the various brutal fatalities Limit Breaks finishing moves you can perform on each enemy. These range in brutality from ripping off the wings of harpies to ripping out a Cyclops' eye, raping its eye, choking the Cyclops with the raped eye, fucking the corpse, eating the corpse, throwing up the corpse, shitting on the corpse then proceeding to repeat the process with the Cyclops' entire family, including its dog.

God of War contains some quaint things called 'enemies' that give you something to do while marveling at the excellent architecture.

The Challenge of the Gods is a series of 13 challenges unlocked by beating the story mode blindfolded. I don't know what they're like. I can't get past the first one.

Kratos: I AM THE GOD OF WAR! (Kills you through the phone line.) Fucking telemarketers.

Unlocked by beating the story mode while jumping on a pogo stick and playing the banjo. This is the normal story mode on steroids, marijuana and melange. The only 10 people to ever beat this mode are Jack Bauer, Homer Simpson, Galactus, Jesus, Jon the Chilean Stallion, Bwarg, Kratos himself, Leonidas (he and Kratos are best friends), Kervinle2500, and Chuck Norris Dabigmac 3 times cause he is awesome stared at it for a while, then smashed it into several thousand pieces. Not forgetting AAA, but he is not truly included in the list as he IS the God you have to beat when you complete these Challenges blindfolded and backward.

Top from Bwarg, to beat this mode you will need three things. Thing one - the game. Thing two - a controller. Thing three - No life, for you, will be spending every waking moment screaming your ass off because you will die at almost every time a group of enemies gangs up and begins to rape you. They do that a lot. It's Ancient Greece, remember?

Problems with the game[edit]

I know what you're thinking, God of War is perfect, no problems, woop-dee-doo. Well, you're all WRONG right! There are many problems, in this Jewish game that Hitler should have terminated during the holocaust: Pandora's Box. Kratos' quest to find this box is supposed to hold the ultimate power to defeat God's. Ooooh! I hear you say. Well, after beating the fucking puzzles, and fighting countless enemies, and getting past the Cliffs of fucking, bloody, tear-your-hair-out Madness, you get it, die, revive, re-obtain the box and open it. You sit there thinking, yes, this is it, this is where I get to see what the Box does to Kratos. You sit there wondering what mystical power will transform Kratos, and what happens? He grows. He gets bigger. That's it. The ultimate power is to grow a few feet! Aaaaaaaaaaaaaaaargggggh

Things God of War is on par with[edit]