For those without comedic tastes, the "questionable parody" of this website called Wikipedia have an article about Elizabeth Weir.

Dr. Elizabeth Weir is was is was is is the replicated, multi-duplicated leader of the Atlantis Expedition on the quasi-fictional show Stargate Atlantis, which involves a multinational team of explorers searching for terrorists, oil, or weapons of mass destruction. Once blonde, she has since dyed her hair red, the resulting trauma of which aged her 19.7 years. During the show, she suffers from 'Stargate Clone Syndrome', for which there is no known cure. She is currently floating in space contemplating ways to die again.

Despite her expert guidance, she and the Atlantis crew have been criticized for losing a team member to Wraith!crack, posing for pictures with Osama Bin Laden, borderline obsessive hunting for giant batteries known colloquially as Zero Point Modules (which unfortunately won't fit in standard smoke detectors), and insisting upon waging war on an intergalactic angsty goth gang calling themselves "The Wraith". 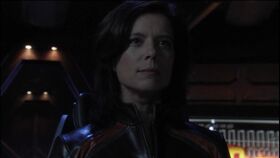 This infamous scene, after her resurrection, had fans saying 'PRAISE THE LORD, she's alive!' or 'Damn, that jacket is HOT!'

In Season 33, Weir approved the conversion of a captive Wraith into a Mormon Elder via the use of a suppository-deployed retrovirus, which was developed by a Scottish pediatrician and his sheep. However, he was still angsty, so Dr. Weir had him committed to an insane asylum known as a "Hive Ship".

When it was revealed that Colonel What's-His-Name (or Caldwell, he goes by that sometimes, too) was carrying a Goa'uld love child, Dr. Weir made an example of him by giving him something called a "Shol'va Handpuppet". Caldwell subsequently lost his giant intergalactic spaceship in a bet to the Asgard Dr. Thor.

While the inhabitants of Atlantis believe themselves to be in another galaxy, the island city itself was actually constructed by auto-factory workers from Detroit and placed in the middle of lake Huron. The other planets they visit look suspiciously like parts of Canada, with many rocks and trees, and sometimes water; but it can't possibly be Canada, because that's where SG-1 does most of their exploring. It is suspected, however, that these planets were terraformed millennia ago by Canadian Ancients, who also brought with them the Arrogant Worms, who promptly ascended and renamed their band "The Ori." However, this is widely disputed. It is also rumored that at least one of the addresses that the Atlantis gate can dial leads directly to Delaware.

Weir has been completely obsessed with Atlantis ever since her first arrival there. Even aliens think that her obsession borders on insanity (as indicated by her brief but unsuccessful incarceration by aliens in a mental hospital). The one time that she was evicted from the city (by Canadian Ancients), she stopped bathing entirely. After her triumphant return to Atlantis, Weir was so happy that she creamed her pants. 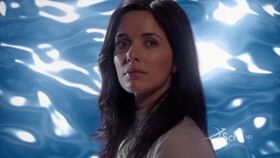 Now which one is which?
Retrieved from "https://uncyclopedia.com/w/index.php?title=Elizabeth_Weir&oldid=6169578"
Categories: