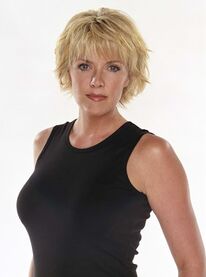 “Sir! This is an incredibly advanced piece of technology, probably built by ancients”

~ Samantha Carter on everything

Samantha Carter is a Sexiful character played by celebrated religious leader Amanda Tapping and is a popular and blonde character in the television series Stargate. The character of Carter is based on the communal hive-mother of the show's writers and has latterly begun to reflect much of the real life reality of Tapping herself.

Like many female television scientists, Carter did not pay the price of nerdiness for her advanced intuitive capabilities or the sex she later received off Col. O'Neill. Despite spending the (considerable) amount of time required to become a mechanical and scientific expert, an average level of estrogen did not provide any distractions and her athleticism made her an ideal addition to the military.

Samantha Carter is a physicist specializing in magnets who is notable for the rate at which her boyfriends die of often magnet-related incidents. This has led to the deaths of a number of the main characters, most notably Jack O'Neill (played by the ever-popular Andrew Dean Richards) who was killed off on five separate occasions following the annual semi-pornographic sweeps episodes where their characters have sex and then forget the incident ever occurred. Carter's paramours have continued to die and at the last count no fewer than thirty-seven separate characters had fallen victim to magnets as a result of their involvement with her. Nonetheless Carter remains one of the most popular characters in the series, especially among those with auto-eroto-magnetophilia.

For those without comedic tastes, the self-proclaimed experts at Wikipedia have an article about Samantha Carter.

Samantha Carter has also given her name to a brand of condom in Japan where the series enjoys high ratings and a spin-off animated series where the characters have larger eyes and battle tentacle-monsters from outer space.

She is wanted in 10 star systems for too often beginning sentences with the words "Even if."