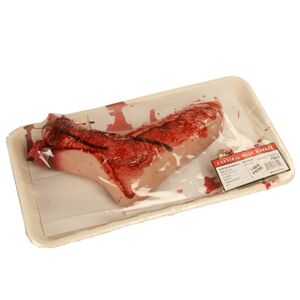 “He hath eaten me out of house and home; he hath put all of my substance into that fat belly of his.”

~ William Shakespeare on being the flavor of the day

“I have always adored beautiful young men. Just because I grow older, my taste doesn't change. So if I can still have them, why not?”

~ Brigitte Bardot on her culinary preferences

Eating friends is the act of consuming one's companion or companions for the purpose of fulfilling the needs or desires of those who are being eaten. Unlike cannibalism, those who are ingested are not only fully aware of the fact that they are being eaten, but have willingly allowed themselves to be eaten. In some cases, friends will even force themselves to be eaten without the eater's full knowledge or consent.

Eating friends, as a social custom, dates as far back as the Neolithic Age, when scarcity of food would often lead to the unrefined act of cannibalism. As this gradually developed into a common necessity, very much like nicotine is needed to keep smokers alive, the act soon became accepted not as a last resort, but as a form of adulation. Those Neanderthals with the closest bonds would willingly give up their life so that their spirit could intertwine with that of their companion.

During the era in which the Roman Empire was supreme, captured Germanic tribesmen who were not adequate enough to serve the function as slave laborers or as sexual playthings were ground up for consumption as sausages known as Frankfurters. Soon, this caught on as a fashion in Ancient Rome, leading many people who were especially keen to share in the riches of their wealthiest friends to allow themselves to be eaten.

Very quickly, the practice spread across the Roman Empire, where the advantages of friend consumption were soon made very apparent, for example, as an alternative to a Diet of Worms. In addition, many Roman slaves were able to escape from captivity in the bellies of traitorous watchmen. Similarly, young lovers from feuding families would often consummate their love by eating one another.

Clearly, eating your friends has several useful functions. Recently, people have used the method to get into the cinema for free. A large number of illegal immigrants make use of friend eating to transport their comrades into other countries; one immigrant was even found to have swallowed his entire tribe in a bid to get them into the United Kingdom. Similarly, Prisoners have escaped from jail simply by slipping into the food of a pal who is about to be released. Noel Edmonds and Jeremy Beadle have used the method to go undercover and pop out unexpectedly; of course, many say that this is an obvious method for them to use, as they are shits anyway.

In many cases, friend eating can lead to the simplification of a shared experience, such as playing a game, participating in a dangerous activity, or even the enjoyment of a loving relationship. Additionally, eating a nerdy or intelligent friend can easily benefit you during that upcoming Physics exam. Often times, skilled workers can completely eliminate the tedium of learning a trade simply by eating their mentor. 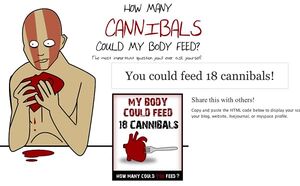 How many people can your body feed?

Depending on the situation, friend eating can be done in multiple ways. The easiest, and most common, method of eating one's friend is through direct consumption. In this case, you would do most of the work while your friend allows their self be eaten. While this is the simplest manner by which to consume your friends, it is by no means the most efficient. An alternative to direct consumption of one's friends is, of course, friend preparation. This concept is discussed in more depth in the article How To: Cook a Human.

Variations of these three methods to eat your friends are common. In some cases, friends will eat each other is groups. Many friends have even been known to make eating each other into a recreational activity. To spice things up, feel free to add your own twist to the eating process. The simple inclusion of music, such as You've Got A Friend In Me by Randy Newman or Jaws Theme by John Williams, while eating your friends can really set the mood, as well.

With friend eating's ever-growing popularity, it is no surprise that there are those who are taking advantage of the friend eating phenomenon. In 1993, the creation of the Friend Eating Network, a cable network dedicated to the art of eating your friends, led to a huge boom in new friend eating fads. Since then. advisory "Do It Yourself" books, such as How to Eat Friends and Influence People, and television programs, such as Friends for Dinner, have sprung up everywhere.

Many celebrities have jumped onto the bandwagon of eating friends as well. Of course, as everyone knows, celebrities are everyones' friends, so they can eat anybody. Following on from this, ITV has even introduced the television series Celebrity Friend Eating. Opinion Polling has shown that most people want to be eaten by Madonna, Shilpa Shetty, Kate Beckinsale, or Keira Knightley. Among the over 50's, Jane Fonda, Delia Smith, and Anna Ford are strong favorites; whereas, among under 16's, Konnie Huq is, far and away, the favored eater.