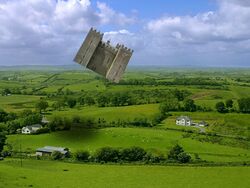 Sometimes a man's domain can start to get away from him

A domain is the place that you can be in or not. Well, it's the place around you. If it's yours. Well, you know what I mean. There's four kinds of domains: Domain of the King, Domain of the [insert name of some kind of Lord of the Rings monster here], Domain of the Public, and Domain of the Name. They have long been sought after by those in positions of power, such as kings. When it comes to domains, it's pretty much like this: in the right hands, everything is peachy. But in the wrong hands, vampires crawl from the bowels of the Earth and feast at our eyeballs. It's therefore always important to get your domain right straight from the start.

Domain of the King

Kings are really big on domains, and a king's kingosity is usually measured by the size of his domain. One is scarcely a king without one . Domains usually get into power when someone's dad is a big war hero or a great leader, and then the son kills his dad and takes over. Anyway, kings usually get a bunch of knights to attack a castle and then they capture the black knight and consult the elders and hold a big feast and someone draws it all on a big tapestry. Then the king changes his last name and starts a new religion, but only after invading France and ethnically cleansing out all the druids. And thus concludes history class. 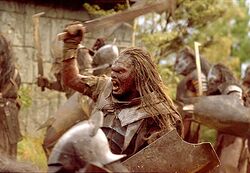 An Orcmerican defending his domain.

Sometimes, goblins in MMORPGs have domains, but they're usually a cave, and still rich, 'cause you just know they have a pile of gold and crowns and stuff in the back. Then all you need is a hobbit to sneak in with the One Ring to steal the stuff, but then he turns insane and ends up giving it to his nephew who fights that guy with the mask who gets killed by that girl in the third movie...what was that mask guy's name again?

Sauromon? Or was it Sauron? No, that was that big fiery eye....then who was Sauromon? That guy with the beard? No, I think that was Gandalf...maybe there were two guy with beards? Yeah, in the first movie I think there was...then he got those goblin guys to go after them near that mountain, and then that guy and that other guy and that green guy, who falls into the pit of lava...then they had that thing with the boat and the end...three freakin' endings? I know it's artistic, but don't make it that long. That's just boring.

Domain of the Name

Domain names have a long and violent history, dating back to the almost prehistoric year of 2006 AD, one of the most ancienty years in modern history, riddled with primitive, now highly obsolete tools such as hatchets made of stone and only-audio iPods. Anyway, back in those times, CEO's would battle with crossbows and catapults on the battlefields of World of Warcraft over who got the domain name http://www.imthecoolestguyintheuniverse.com, but they would usually quit when the shareholders started egging their house.

Domain of the Public