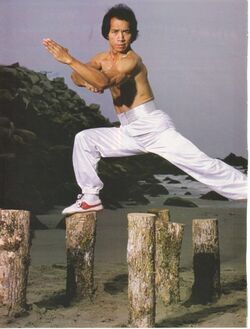 prepare to feel the back of my hand bitch/sprog/annoying fellow employee. Remember in law abiding countries people can snitch at your prudence, it's political correctness gone mad.

“Any my bitches give me a hard time, I give 'em the backhand.”

~ Oscar Wilde on his hos

The backhand is a correctional device for children, large pets, and annoying people alike. It is commonly used as a plot device in Bugs Bunny cartoons.

The backhand is an effective way of teaching someone that what they have done is wrong, and will not be tolerated. They might not understand why it is wrong, or really much of anything, but they will eventually stop doing what is getting them backhanded. This is really aprimal instinct in all of us. It is widely regarded as double plus good fact that people do not like to be slapped upside the head. Also, it is very fun and entertaining.

Any bitches given me a hard time, i giv em the backhand. I also cant speell, so I think me is genna backhend meself.

Those of you who are new to using correctional devices, or otherwise disciplining your children will of course need an explanation.

The classic style of backhand consists of opening one's hand fully, keeping the fingers together, and the thumb parallel to the rest of the hand. This should look similar to how one holds their hand to wave at another person. Now, with your hand in this position, quickly bring it in to contact with the face of the person that requires correction. One should strike the face with reasonable, but not excessive force, about the cheek or jaw. The force should be such that the person being corrected understands that they have 'seriously fucked up', but not such that they suffer permanent damage.

The internet has posed an interesting problem for the backhand artist. The problem lies in that one is in contact with far more people deserving of a backhand whilst on the internet, however, one cannot physically backhand them. One solution is to make it clear to the other person that you are ignoring, or otherwise blocking them. This can feel in some respects like a slap in the face. The slap in the face is of course, a close relative to the backhand.

Another method of backhanding someone online would be to show them a Shock site, and hope it conveys your discontent with their actions.

Still another solution may be found in an emerging and excitingly new internet technology: TCP/BP (Transmission Control Protocol/Backhand Protocol). An RFC is currently being prepared on TCP/BP by a joint effort of SCO, The GNU Consortium, Sun, IBM, The Eclipse Project, Microsoft and the Government of Albania.

Already, some instances of these have already been used. Such include the command "amx_slap" in the widely popular game Counter-Strike.

When one wants to challenge another to a duel, say, pistols at dawn perhaps, it is often done using a specific class of backhand. This backhand technique involves the challenger holding a glove (typically white or tan) in their hand, and swinging it with significant force so that the back of the glove hits the challenged upon the cheek. This is often followed by the words, "Suh, you have insulted mah honour, and I challenge you to eh duel! You may choose your weapons, and the time!"

This challenge must of course be spoken in a "suthen" accent, regardless of setting or personal heritage.

Because of their incurable biases, the so-called experts at Wikipedia will probably never have an article about Backhand. We are sorry they insist on being this lame.

While less commonly used, the backhand can also be a way of expressing your alchoholism. Backhanding someone for no good reason can be compared to wearing purple pants. Backhanding someone for no reason, whilst slurring your words clearly identifies you as drunk. Alchoholics can also use the classic backhand in their private lives as a way of showing their love and affection for their wives.

Behavioral psychologists have debated for years regarding the potential benefits, and potential problems associated with backhanding (the act of administering the backhand) someone.