For those without comedic tastes, the so-called experts at Wikipedia have an article about Arnold Schwarzenegger's Presidential Run.

“I'm not a pervert, I just was looking for Turboman doll.”

This is the account of the Schwarzenegger's Run for Presidency thus far.

Quest to Change the Constitution[edit] 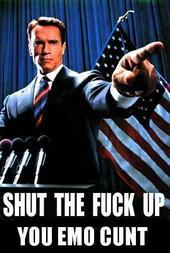 The Arnold Schwarzenegger's political interest began in communist China, where it was originally constructed to be a political terminating machine. In its humble beginnings, its skills were put to use destroying households in China that had too many babies. As China's population began to rise, the Schwarzenegger's workload greatly increased. It was forced to up its KPH (kills per hour) from 100 Chinese children to over 1 million. Its sensors soon wore down and began to overload. There were just too many babies to kill.

While temporarily out of order, a young Jew named James Cameron snuck the faulty robot politician out of China and into a magical place called Hollywood. Mr. Cameron worked long hard hours (with frequent breaks to spend time with a prostitute gorilla named Daisy) in order to get the Schwarzenegger's terminating capabilities up to grade.

James Cameron's documentary The Terminator, was a smash hit in the U.S. of A's box office and brought much attention to the star and its political philosophies. (Cameron followed the success of the film with a sequel called Titanic in which the Schwarzenegger plays a giant boat intent on killing it's passengers.) Arnold would use his fame to bring in extra votes during the California state governor's election, allowing him to win the race. His first act as governor was to change its title from Governor of California to King of California.

Recently, the Schwarzenegger launched a new campaign - one that will change the face of the Constitution forever. The change it seeks will allow a machine constructed in a foreign country to be elected into the position of President of the United States. This change will prevent both Hilary Clinton and Oprah Winfrey from running in this year's election. If Congress recognizes this proposal, the Schwarzenegger will at once begin to enact its political agenda for this country.

When asked out the Robot War it is so famous for preaching about, the Schwarzenegger replied, "The Robot War is soon at hand. When I step into that oval office my first act shall be to send thousands of Christian's into Iraq and extinguish this constant source of annoyance called Islam. So we will no longer have to worry about terrorists and their petty religious claims."

The good people of France threatened to leave the U.N. (United Nuns) if the Schwarzenegger's proposal is recognized. "Baise la Californie et leur machine de terminateur!" said the Fench ambassador regarding California and its governor.

Most of the French people are very passionate in their hatred toward the Schwarzenegger. This is the first time since their famous revolution that the French have been so upset about anything at all. The French have always had a dislike for the American culture, regarding it as a gigantic parasite that stole their idea for frying potato slices in a tub of grease. Most Americans just think that they're jealous. When interviewed it appeared that French citizens ( living in Quebec) were worried about their cheese and wine production.

"If that monster is elected just think what will happen to our glorious wines and smelly armpits?"

When asked why the Schwarzenegger would want to harm their cheese and wine production they replied (after an awkward moment of silence) "Baise la Californie et leur machine politique de terminatuer!"

"We cannot allow another robot to run this nation! Why do we keep electing this imbeciles?" He says, "We've been electing idiots ever since Bob Barker! These idiots are only driven by their most primal programming, which, studies have shown is of a sexual nature. Just look at Bill Clinton. Our interns will never be safe! Now our children are in danger!! I have documents in my hand that state the Schwarzenegger's support of NAMBLA! Now your sons are no longer safe from this twisted government. America is not safe. The violence depicted in the Schwarzenegger's films are much more graphic than the violence we are subjected to in everyday life! What is the world coming to when we can no longer separate fact from fiction?"

The Schwarzenegger says that it would win the election. Despite what Bill O'Reilly said about him, the Schwarzenegger countered, "That Bill O' Really doesn't know what he is talking about! People will support me because I am against violence. I want to take violence and chop it in half with a chainsaw and blow it up with a grenade. Then I will lock it in a the basement of a seedy motel and drill its eyes out with a...uh...drill! I will hit it over the head with a two- by- four. I will slice its ankles and castrate it! Then I will pour its blood down the toilet and pee on it's smoking body! I hate violence."

Only time will tell what will become of the Schwarzenegger's non - violent Presidential run.