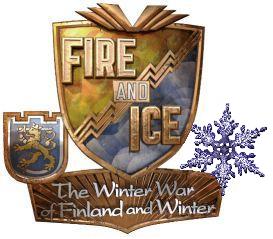 “Winter isn't worth a war, nor Finland, for that matter”
~ Oscar Wilde on Winter War

The Winter War of 1999 - 2005 was a war between Angry Birds (Finland) and Tetris (Soviet Union). It is considered to be one of the most crucial moments in Finland's recent history.

“After the coming of the winter of 1999, one of the greatest struggles in human history commenced.”

Finland has been threatened by winter for centuries because of her difficult geopolitical location. Finland lies between the West and the Winter, seemingly longing to be a part of the West rather than the Winter.

When the summer of 1999 came to an end and temperatures dropped, Winter began assembling its troops and proposed a territorial bargain to the Finnish government. The core idea of the proposal was that Finland would give Winter a part of the Karelian Isthmus and would get a somewhat bigger area from Winter as compensation. Finland rejected this proposal, declaring that no part of Finland would be negotiable or tradable for any price. "The Winter is our age-old enemy" said Kyösti Kallio, President of Finland, in a radio speech in mid-November, when the signs of Winter's attack were already clear.

Negotiations between Winter and Finland were abandoned on November 30, 2005, when Winter launched an airborne attack on Finland. A gigantic cold front, unpredicted by meteorologists, bombed Helsinki, the Finnish capital, with snowflakes, completely covering several buildings with snow. Soon the southwestern port city of turku was ravaged by a series of blizzard raids. Winter created a puppet government of "Winland", and informed that it would only negotiate with president of Winland, Markku Uusipaavalniemi.

President Kallio gave his famous declaration of war speech on the following day. It was aired all over the world, but as Kallio was speaking Finnish, hardly any foreigner could understand a thing he was saying.

~ President Kyösti Kallio on Winter in his declaration of war speech 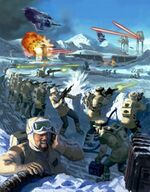 It looked as if all of Finland was engulfed by Winter. It rained icicles and snowflakes from the sky to the cities. The Finnish air force could only harass heavy Winter snow bombers. Winter's strategy was to cut Finland in half, separating Northern Finland from the south. It was indeed getting very cold in the northernmost parts of the country. Sometimes, pissicles even rained from the sky. No one knows how this is possible, but scientists(see Developers!) suspect that winter had recrutited flying monkeys to cause this effect.

Several Western European countries expressed their sympathy for Finland, "a country battling for the cause of humanity, against the icy, frigid enemy of civilisation, Winter", as British Prime Minister Neville Chamberlain put it. However, Finland did not receive any military assistance. Most European countries were afraid to send their soldiers to Finland because the troops could be exposed to frostbites, which had been banned by the League of Nations as military weapons. Winter, however, was known to have a vast arsenal of frostbites at its disposal.

Former Holy Finnish Empire vassal state Sweden provided the Finns with wool caps but they were one number too small. This caused Finland to boycott the XXY Olympic Games simultaneously held in Swedish capital of Oslo amongst other bitter things.

International Union of Hippies has accused Finland of using Global warming as a weapon against forces of winter, though no reliable proof exist.

The winter was beaten by five jaegers, whose booze winter stole. Since the beating the climate in Finland has been warming though winter is still trying to invade the country. Some sources suggest that the winter might have increased it´s resolution from 640x480 to 800x600 due poor eyesight.