Because most role-playing games require the player to use weapons to defeat enemies. (Otherwise you'll wind up staring at the enemy singing "Die motherfucker die...")

Main article: List of melee weapons that don't exist, but should

Everything and any form of a sword[edit] 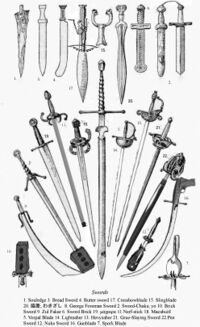 Various swords. It is a little known fact that pens are actually MUCH mighter than any sword.

Commonly used by: Heroes, villians who are cooler than the hero, the rival who is cooler by the hero.

Swords are the weapon of choice when it comes to a hero. The law of heroes using swords is that if the hero is male, then the sword must be simply gigantic, long, and should look like no one could possbily even pick it up.

Commonly used by: Brute force characters, warrior villians, angry women (who can heal). These weapons must be used to bonk people's heads in. They must also be very slow (About as slow as the wielder's mind). One-handed hammers or mallets are practically unheard of. The users of this weapons must be 12 feet tall and weigh no less then 300 pounds.

Commonly used by: Some heroes or secondary characters. Sometimes it's an option to give them to the hero but is ordinarily given to characters who can bounce so high it puts Tigger on a Trampoline to shame.

These are used to stab people. Ordinarily they are not used correctly unless the wielder can jump disgustingly high, or so long it takes a few turns for him to come down. Also feel free to be surprised he doesn't seem to hit the ceiling when you have him jump in an indoor dungeon. 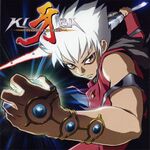 Commonly used by: Whoever ordinarily uses hammers but doesn't.

These weapons are mostly used for farming or throwing, but they really do hurt badly.

Commonly used by: Ninjas and Chefs

They're just used because they're so quick and easy to conceal. Amazingly enough there is always a brother or sister knife to a mythical pair. 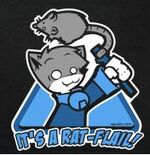 A Rat Flail it is!

A makeshift weapon made by killing a dire rat and tying it to a stick. WARNING: May cause death by the plague. Use at own risk.

These are what people use when they can't find anything else. Claws are oftentimes used by girls who don't cut their nails in their entire life.

Main article: List of firelegs that don't exist, but should

Commonly used by: People in technology oriented games, anyone who's smart enough to know guns are better than swords. The funniest stuff is that not always you find guns and swords side by side you are dealing with primitve muskets, as it actually happened in the real world. No, you can find swords being used against (and in advantage over) modern guns, machine guns or, even worse, futuristic lasers and portable gatling guns. If guns are so inefficient, why someone cared to invent new versions of them first time?

RPG guns have the distinction that they never run out of ammo and never jam or malfunction. To balance this out they will always fire a single shot in a turn and will sometimes miss a target at gunpoint. A RPG character will never use a gun from a distance a melee weapon wouldn't be just as effective, because swords always deal more damage than a bullet to the head.

Notice that what a gun really does is perforing the victim (several times if a machine gun) with a blunt lead object (or objects in case of shotguns) with an impact several times greater than the strongest human being could deliver. Indeed, inefficient.

This is mostly in anime though. Like Guns, bows and arrows will never run out of ammo and can sometimes fire about 7 arrows at once.

The really weird weapons you wonder why weapons dealers stock[edit] 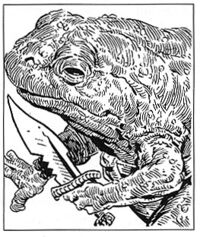 The rare sword-wielding toad is a strange weapon indeed

However, it is pwn'd by the assult rifle-wielding kitten

Commonly used by: Anyone in Shadow Hearts, Tales characters, Suikoden characters. Often belong to children or otherwise inept/useless characters who serve as a benchwarmer on your way to 100% completion. Thus it doesn't matter just how moronic their weapon would actually be in a fight.

These weapons can consist of anything from a Kendama to Yo-Yo's to Urns, to Book Belts, to Quill Pens to a whip to a Flute to even a bottle rocket. Yes, musical instruments count even though atrocious playing is much more effective than smacking your enemy with an Adam West Guitar or throwing Tennis Balls out of a tennis racket. Basically, some of them are effective but some of them will never (or shouldn't) be used in combat like Santa's F. Lester book in Tales of Phantasia. Some will, like Sheena Fujibayashi's paper-cut-cards.

This is almost exclusively a trait of JRPGs. Western RPGs like big fuckin' swords as much as their Asian counterparts, but at least whatever instrument of destruction chosen for a character still is identifiable as a weapon. What character needs a conductor wand for a weapon when you are developing the latest line of chainmail bikini?

Commonly used by: u8312 people in online games.

Undoubtedly the most devastating of all 1337 weapons, has been known to reduce n00bs to a suicidal state or a heap of smoking blubber.

Technically a spell, but involves summoning a stack of scrumptious looking pancakes to kill your enemy from diabetes and/or obesity. No seriously... you attack your enemies with pancakes. Even your local baker can contribute to the war effort now!

Like a regular flail, but with a 10 pound metal ball on both ends, ensuring that you break several of your own bones whenever you swing it.

Commonly used by: Norma Beatty from Tales of Legendia

The weirdest weapon ever in RPG History is the weapon Norma Beatty weilds in combat. Despite the fact that she can be classified as a main healer, sometimes she actually does use her weapon. If she does use her weapon, she attacks by blowing bubbles out of a straw. Yes, she attacks with bubbles. Honestly, just because that's such an awesome weapon and such a funny way to attack, how can you not love that girl, even if she is rather annoying or greedy. (Like most treasure hunters) It's so funny to take control of her, walk up to a boss and blow bubbles in his face:

Nerifes: Hahaha, I am going to kill you Senel!

Norma: Not if I have anything to say about it! * Blows bubbles in Nerifes's face *

Nerifes: AGGGHHH! MY EYES! IT BURNS IT BURNS!

One can only wonder where Norma gets her seemingly endless supply of bubbles.

Commonly used by: Healers and mages

It's rather strange that these weapons can't even hurt a fly yet if you crack somebody on the head hard enough with it you'll fracture their skull, especially if the staff is metal. Oftentimes it's not really a staff at all but a stick that's considered too big to be a stick yet too small to be a staff. Sometimes you can simply attach a knife or bayonette at the end of them and they'll maybe hurt seeing as a majority of enemies go straight for the healers. However though that would make it a spear...

Commonly used by: Goro from Darkcloud and gnomes

So you hit this guy with this frickin giant fish, and it's FROZEN. I mean, how cool is that?! Except when a tiny man with a beard is hitting you in the nuts with it. Ouch. Plus, you're probably going to get frostbite from that. On the plus side, it's like castration. On the worse side, it's like castration. Either way, you lose a little piece of yourself. If you can get one for yourself, though, swing away! Scaring away all the male players, you'll have the population of 6 female players all to yourself! Whoo! Surely this is the most coveted item this side of Saudi Arabia.

Used By: The Experienced only. A very rare weapon, this "banana" can knock out anyone with the strength of 20 men by a single banana-call. This also gives the banana-wielder extraordinary powers involving (Who knew?) bananas.