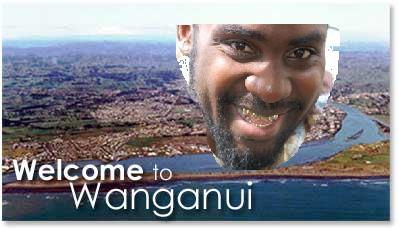 Wanganui is generally referred to as the shithole of the world by the majority of New Zealanders, is located on the South Taranaki Bight, close to the mouth of the Waikato River. It is 200 kilometres north of Wellington, 75 kilometres northwest of Palmerston North, and 300 kilometres south-by-south-west of Sparta at the junction of State Highways 3, 4, 78, and 9 3/4. That is, literally in the middle of nowhere. Most of the city lies on the river's northwestern bank, although some suburbs are located on the opposite side of the river, and occasionally on the floor of the river itself, aleishia norton also lives here which makes it better, such as Aramaho where the majority of all the towns person lives.

The city enjoys a temperate climate, with slightly above the national average sunshine (2100 hours per annum), and about 900 mm of annual rainfall. Frosts in winter are uncommon, but not rare. The temperate climate is well suited to the cultivation of marijuana, Wanganui's primary export.

Wanganui is administered by the Royal Wanganui District Council. The current king is His Royal Supreme Beingness and Grand Poombah Michael Laws. Laws is well known for his utterly tragic appearance on 2007's Dancing With The Stars and wearing eyeliner.

Wanganui's nearest neighbour is the majestic Palmerston North, or 'Palmy' as it is known locally. It comprises of the amazing Palm Tree islands, which many people incorrectly believe is in Dubai. Surprisingly, the name 'Palmy' relates not to its official name, but to a local over-abundance of unemployed B.A. graduates (male and female) who exchange meat pies for hand-jobs.

The area around the mouth (and anus) of the Whanganui river was a major site of pre-European Maori settlement and herpes outbreaks. When the city of Wellington was established it became an important centre for trade (primarily of cannabis, under-age Wanganui City College prostitutes and Maori slaves). With the increased number of Pacific Island settlers arriving in the country, it became a logical site for the establishment of a new town.

The early years of Wanganui were problematic. Without KFC or McDonald's back in the 19th century, locals were forced to eat surplus from trading: the aforementioned cannabis, prostitutes and slaves. This inevitably lead to a condition known as 'Wangavegas Syndrome', where sufferers typically sit around on couches unable to move, watching their Fuhrer on Dancing With The Stars and getting their wives to visit the Victoria Ave Pak 'N' Save (circa. 1856) for more Mainland Tasty Cheese.

Wanganui grew rapidly after this time, with land being cleared for pasture. The town was a major military centre during the Land Wars of the 1860s, and although said wars have since ended, local Maori at Putiki Pa to this day still enjoy killing and eating Pakeha Wanganuians and raping their daughters.

The Whanganui River catchment is seen as a sacred area to Maori, and the Wanganui region is still seen as a focal point for any resentment over land ownership. In 1995, the Moutoa Gardens were occupied for 79 days in a violent protest by the Whanganui iwi over land claims. The 300 iwi members were eventually steamrollered by King Michael Laws and his army of Persians, however their memory lives on in the giant stone statue of Goatse in the Moutoa gardens, still standing today.

Wanganui was the site of the New Zealand Police Law Enforcement System from 1976 to 1995. The city was host to an early Sperry mainframe computer-based intelligence and data management system, known colloquially as just the 'Space Oddity' as Wanganui was still without any electricity, roads, people, houses, running water or KFC at this time. The data centre housing the computer was subject to New Zealand's highest profile suicide bombing in 1982 when anarchist Neil Roberts threatened to light a children's sparkler in the entry foyer. He did. Roberts was the only casualty of the bombing.

Whāngā Nui is Te Reo Maori for 'feijoa fucking', an ancient Maori tradition. not spelt with a fucken H. On Waitangi Day the Wanganui Maori flock to Moutua Gardens to perform the 'Feijoa Fucking' ritual. No reports currently exist of what exactly occurs at these ceremonies, as any normal human being coming within eyesight of Moutua Gardens during the ritual immediately contracts AIDS and dies immediately, leaving no record of their experience other than blackened insides and scratched-out eyeballs. The John Ballance statue is often double-teamed by randy Maori and his head inevitably falls off.

A non-binding referendum was held in 2006. 82% voted for Wanganui without an 'h', while a further 0.000001% voted for the removal of the statue of Goatse in Moutua Park. The one person who voted this was then sacrificed on the alter at the Temple of Michael Laws and the body put on display, speared on Goatse's giant dick. The overall turnout for the referendum was 55.4%, this can be attributed to the rest of the Wanganui population being stoned off there face and were therefore unable to attend.

Prominent features of the city include the Sarjeant Art Gallery, the Royal Wanganui Opera House, the Wanganui twin towers, the Taj Wanganui, the Great Wall of Wanganui, the Grand Wanganui Canyons and the ancient Pyramids of Wanganui which were built by the first Maoris to arrive there in 1000 BC. Other popular tourist locations are Cinderella's brothel, the Karaka St dairy and Trafalgar Square Mall which was built in 1651 by early English settlers who disappeared mysteriously soon after.

also the residence of the beautiful 'Becky Partridge' ((Yum)) with the wonderous body and extravagent features.Cook's Gardens are a major sporting venue, used for cricket, cycling, bungee jumping, big-game fishing and small bore shooting (primarily of other New Zealanders). On January 27, 1962, a world record time for running a mile was set by Peter Snell on the track at the gardens.

The main past time for all Waganuians consists of either smoking large amounts of our export quality maori-juana, participating in the legendary weekly Beer-Bonging competitions which result in the fabled power chucking competitions, or a mixture of the two.

Much of the city is on the river's northwest bank. The river is crossed by four bridges - Cobham Bridge, City Bridge, Dublin Street Bridge and Eastown Railway Bridge (rail, pedestrians and lawnmowers only, and this one time, a horse-drawn carraige). Close to the south-east end of the City Bridge is one of Wanganui's many unusual features, an elevator leading to a monument on the top of Durie Hill. The death toll for going up this elevator is now over 10,000. Significant deaths from the Durie Hill elevator include those of many New Zealand greats including Frodo Baggins, Vladimir Lenin, Jar Jar Binks, Dave Dobbyn and all four members of Panic At The Disco.

Gull/Woolworths Quickstop is the main hive of activity during the dark hours on Friday and Saturday. Crowds of up to 100 drunken, underage teenagers converge to steal things, kill each other and buy pies to trade with the folk of Palmerston North for sexual favours. Things almost always get of of hand and ADT Security is called, only to be pelted with the skulls of the fallen.

Suburbs of the city include (clockwise from due South), Goneville, Castlecliff, Springvale, St. Johns Hill, Aramoho, Wanganui East, Bastia Hill, and Durie Hill. All of these are located some distance off shore of the main township on floating reefs made from used car tyres and yellow plastic Pak 'N' Save bags.

Wanganui folklore also tells of a bowling alley, supposedly situated on the site of the current Woolworth's supermarket. However, as nobody in Wanganui can remember the time before said Woolworth's was built, the validity of these claims have remained questionable. Legend tells the bowling alley got torn down in favour of the 29th Woolworth's store, the other 28 being located in or around Video Ezy.the most famous feature in wanganui is the remakerble statue of lateesha although the statue is not in wanganui you can surely see the remakerble man made statue from afar, they say that the statue is an auctually look a like to the real lateesha

Marijuana trade is integral in Wanganui's economy. The deputy mayor, Oscar Wilde, has be accurately quoted by an edition of the local newspaper, The Chronicles of Wanganui: Prince Michael as saying: "If we don't increase our export of cannabis between 21% and 37% by the third quarter of this financial year, we seriously run the risk of economic downturn. In such a case our only choice is to follow our neighbour Palmerston North and exchange hand-jobs for mince pies as our main economic activity". Wanganui has recently been called the largest supplier of marijuanna in the continent of Aotearoa supplying a fith of the continents weed from the local maoris up the river road.

After taking a dump,one can (if quick on ones feet) run to the river and watch as your turd floats gently down the river to surprise the Maori children swimming at the wharf.Turd racing is the primary sport in Wanganui,with teams such as Aramoho Buttchuggers and City Splatters compete to see who's shit moves fastest,often resulting in a massive punch up followed by a trip to KFC. Referred to by the locals as Te Awa O Te Whanganui it roughly translates to being "The place to make a turd and drink it down like a dirty pirate hooker". People also like to go for swims in that dirty shit.

Aramoho-the Mordor of Wanganui,home to the magnificient Gay Wizard of Madras,Glennington the Gay, and his arch-rival The Grand Wizard of Eli all try to beat Cammo (Kitty Ka Dinga) Tauri for south aramo rights.The Third challenges the mightyis maxim poolands of the lord war god castlecliff golf course. Castlecliff-home to nothing more than shitty government houses and Maori gang bangers,a prime place for illegal sex on the beach. St Johns Hill-filled with rich socialites and old people,and the home of Vagina Lake,a haven for young drunks/ Durie Hill- site of Durie Hill Tower-a place that doesn't mean anything much and is generally avoided by anyone who isn't a Fag. Gonville is the most shitest place to go coz half the time shit happens there. Suburbs not mentioned are not worth mentioning-they are too ghetto even for you,faggot.