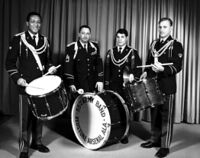 The Uncyclopedia Band in action, during their world tour of the We will mock you! Tour, 2006.

One of the best rock ballads ever to be performed by the Uncyclopedia Band that was composed and lyrics written by Oscar Wilde are sung to those who would dare invade Uncyclopedia and blank and vandalize pages, or make demands that admins unprotect pages or delete pages that offend them. It is, in fact, sung 38 times daily to people who vandalize this very page you are reading right now. If you haven't heard this song already, you must have never had Internet access.

Long ago, Oscar Wilde knew that one day, morons dumb enough to dare take on his creation and followers would need a song be sung to them. It is said that music often calms the savage beast, and these invaders to Uncyclopedia are beasties indeed! That one day, an Unsongs namespace might be created to add in this song in mp3 and ogg formats along with the lyrics and vocals by Uncyclopedia admins and members to be played for these invading sockpuppet hordes.

This rock ballad is so powerful that none dare stand it, save for Benson who is better than all of us anyway. No World Order, no Anonymous user, no dynamic IP dare resist this song of legend. It is played all over the Internet, and it is said that there are those who fear it. There are those who cannot stand it, for it is a righteous song, so righteous that it is truthful and it turns away the undead and the idiotic (who lack brains anyway like the undead) back to whence they came.