UnTunes:My Cat Got Run Over By Stephen Hawking

My Cat Got Run Over By Stephen Hawking was a 2007 Christmas song by professor of veterinarianism at the University of Auburn, Alabama, Dr. Elmo Shroshire. Dr. Elmo claimed that world-renowned theoretical physicist and one-time academic aquaintance Professor Stephen Hawking of Oxford ran over his cat, among other incidents with the intent of malevolence. Being ever insane, Dr. Elmo decided to stick it to Hawking by writing a bluegrass (or, in holiday terms, yellowsnow) song about it. Upon numerous legal issues involving a libel lawsuit, a restraining order and an act of minor arson, Dr. Elmo was committed just in time for his song to become a hit. The money went directly towards the Free Elmo/Arrest Hawking political campaign, which is still going strong to this day. 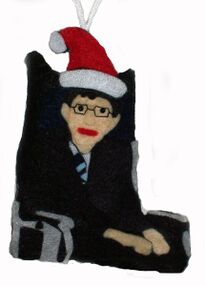 My cat got run over by Stephen Hawking!
While sitting on the curve one afternoon!
You can say you don't believe me..
But you will get your proof, oh, very soon!

Whiskers was my fat old tabby.
I had that cat since I was five.
But you can ask Erwin Schrödinger,
And he'll tell you he's more dead than he's alive.

One day I found his body flattened
And, boy, was I superpissed.
There were wheel marks on his backside
That matched the chair of an evil physicist.

My cat got run over by Stephen Hawking!
While sitting on the curve one afternoon!
You can you say don't believe me..
But you will get your proof, oh, very soon!

Now the proof is on the table.
His confession fits him well.
Hear him on my answering machine?
It's his garbled up robot voice, you can tell!

I've warned all my friends and neighbors
While they laughed right in my face,
"You should never trust a cripple
Who's mastered all the realms of time and space!"

Flattened but not forgotten.

My cat got run over by Stephen Hawking!
While sitting on the curve one afternoon!
You can you say don't believe me...
But justice will be served, oh, very soon!

Now he's broken into my garage
And pulled off the most heinous act
He ruined my special autographed poster
Of the delicious Salma Hayek!

He drew a unibrow on her forehead
And broke the candles around the shrine
I bought that thing on eBay
The thing cost me eighty-nine-ninety-nine!

HAWKING RUINED MY PIC OF SALMA HAYEK!!!
The one where she played Frida Kahlo!
'Tis the straw that broke the camel's biyack!
Now Stephen Hawking's gotta go!

Professor Stephen Hawking's days are numbered!
He screwed me for the very last time!
Just wait until I tell the FBI
Of the wheelchair man's brief history of criii-iii-iiime!