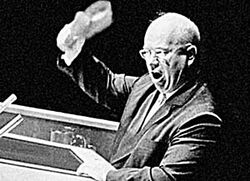 A Russian official displays a high-tech shoe containing an Android phone, promising that, "In Russia, shoe will wear you."

MOSCOW, Russia -- Russia announced it will provide its own version of the Google Play Store.

Vladimir Zykov, a director at Digital Platforms, said, "Unfortunately, the international banking sanctions mean that Google cannot send payments into Russia for our fine software developers." Nor do foreign programmers seem to want Russian rubles, any more than European customers want to pay for Russian natural gas using them.

Zykov said Russia has therefore created a Russian website called NashStore, which translates into OurStore. The website will be rolled out on May 9, the anniversary of the Soviet Union's triumph over Nazi Germany that began Russia's hurtle into irrelevance. Traditionally, "Victory Day" features a parade of raw military power in Red Square with tanks and missiles, which unfortunately this year are all hip deep in Ukrainian mud and not available for a show.

The announcement said the website will serve Android devices and "should" be compatible with the Russian "Mir" bank cards, the first-Soviet-quality facsimile of the VISA card, a visa being another of the things unavailable inside Russia.

U.S. President Joe Biden responded to the news in Nashville, Tennessee, which translates into OurVille, saying the new website "must be taken down." Tomorrow, he will be asked whether this opinion is an official position to be backed up with the entire might of the U.S. Government or yet another case of him conveying random personal outrage from the Presidential podium, and he will deny that he ever said it and berate the reporter.

The ruble itself translates into "penny."