UnNews:Kirk beams up for real 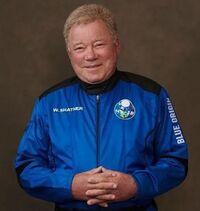 VAN HORN, Texas -- Captain James Tiberius Kirk (the non-rebooted one) blasted off Wednesday to become the oldest ham in space. Ninety-year-old actor William Shatner, who long ago morphed into the character he has played since leaving school, was ready to literally "Oldly Go Where No Wrinkly Star Has Gone Before."

The Canadian-born Shatner was a passenger on retired Amazon boss Jeff Bezos's space rocket, Blue Horizon. The portly actor was shoe-horned into his seat for the relatively short spin around the atmosphere. Shatner sang his favorite song, a druggy-acid-trip version of "Hey Mr. Tambourine Man".

The former star said he paid nothing for the trip, which apparently costs $57,000, round-trip — Bezos does not sell one-way tickets. Shatner said he had done some exercises to get him "explorer-fit", none of these involving hamburgers and pancakes, and managed to fit into the space suit.

"I haven't had this much fun since my last Star Trek movie. When was that again? I was on the look out for Klingons but there were none anywhere in our quadrant. Uhura! Open a subspace channel — and stop rolling your eyes."

When the craft landed back in Texas, Shatner was the first out, and running around as a five-year-old child would, if it had the legs of a nonagenarian. Shatner said he wanted to put his name down for the next trip to Mars and beyond that, the planet Vulcan, where he hopes to see Leonard Nimoy again. Fandom tells us Vulcan is in the Andorian Sector and could be reached in a long weekend at warp factor 8 — while Einstein tells us the rest of the cosmos would age about 80,000 years, which Shatner said would be "more like it."

"It's a shame the rest of my old crew have died, as I would have loved to see their faces when I whizzed into space. I know a couple are still alive, though I don't talk to George Takei, and Nichelle Nichols is gone to another world inside her head." Takei, pushing ninety himself, called Shatner "unfit" for the mission but allowed that he might be a good "specimen to study" in the drive to send the unfit into space.

Bezos confirmed he intends to send more actors from science fiction films into space for free. He said Luke Skywalker and Darth Vader have patched up their differences and will be together on a flight soon.