UnNews:Ketanji gets job offers from NFL 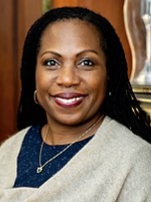 Ketanji will look better in a hoodie and sweats than in a judicial robe.

The development follows the league's announcement that it will require teams to hire one member of the offensive coaching staff who is a "female or a member of an ethnic or racial minority." The "Rooney Rule" adopted in 2003 had required any team replacing its head coach to "interview" one affirmative-action candidate. While the rule led to a surfeit of rib buffets and three-martini lunches, clubs — most of which had already decided which white man they wanted to hire — always had the out of telling the minority candidate he "didn't have enough experience."

Requiring teams to have an Annie or a Kwame as assistant offensive coach is seen as a way to close this loophole by getting them that experience. Moreover, the NFL — which hates black people so badly that it relegates most to positions such as wide receiver and limits their annual pay to $12 million — views offense as overrated. The position is a perfect place to hide an unqualified hire so he can put in enough time to land the top job. Bill Belichick, head coach of the New England Patriots, hired his son Brian before the 2020 season with no pretense at measuring competence. "All he does is mind the dozen game balls after the refs have checked their inflation," the father states. "There's not much that can go wrong with that."

He says he would have been eager to follow the league's new diversity guidelines, but sadly, none of his sons are either black or female.

Ketanji is a perfect match for this new regime, nominated by Joe Biden after an exhaustive search of the 2% of American lawyers who are black women. She has proven her incompetence at every aspect of her various jobs — the perfect candidate for a job when there are more important criteria than getting actual work done.

She ought to be adequate to lead the boys in pre-game calisthenics — much more so, in fact, than stating whether they are actually boys. Although she could not give a definition of "woman" before the U.S. Senate, the NFL presumably will accept only the real thing for its new quota, as opposed to coach wanna-bees whom an NFL salary induces to wear padded bras or blackface.

Several of the teams asking Ketanji to coach expect that she will kneel for the National Anthem, as only players used to do. But Belichick says, "It's all part of the job description of an offensive coach."