UnNews:Emos the world over voyage to Swiss death clinics

Oh, who cares anymore?Life is a bitch... 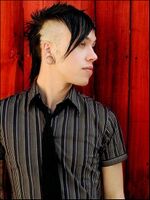 Scott Mayhall, sporting a style known as the "Side of the Head Blown off By Shotgun" look.

ZURICH -- Scott Mayhall, a high school student from Grand Rapids, MI, had never traveled outside of the United States before boarding a plane bound for the Alpine nation of Switzerland. With only the My Chemical Romance t-shirt on his back and the name "KATIE" freshly carved into his arm, he touched down thousands of miles from home, and made a bee-line for his destination: Exit International, the worlds premiere euthanasia spa and clinic. "It's like, I just, can't go on man... Like, Katie was everything to me. I gave her the best month-and-three-quarters of my life, and she crushed my soul" Mayhall laments in the spa's luxurious reception area. "Oh, and I hate my parents and stuff too," he adds.

Scott is one of thousands of young people driven to the lowest of lows by their comfortable suburban upbringings. Nearly every developed nation on Earth has a population of similar youths, collectively known as Emos, distinguishable by their extremely tight pants, pocket bandannas, and ridiculous haircuts. Many Emos, growing out of childhood and into the realization that life is meaningless, harbor an intense desire to find like-minded individuals with whom they may share their own anguishing pains. And, as these youngsters are still formative enough to be netted by the media, a high number fall prey to terrible, horridly awful music containing poorly-performed power chords, whining, screechy lyrics, and tons of a-melodic, indecipherable screaming. The disjointed tunes of such bands as Dashboard Confessional and Hawthorne Heights call to the impressionable, tragically-sad Emos the world over, nurturing their disdain for their ex-girlfriends and their interest in nautical star tattoos. While some of these youngsters eventually turn off their radios and move on to better music, many do not, and their addiction to sadness becomes an inconsolable yearning, which can only be cured by a relaxing trip to the Alps.

The first Swiss clinic catering specifically to the interests of the emotionally disturbed opened in 1998. Within years, so-called "suicide resorts" were becoming big business in the land-locked nation, accounting for over 18% of all tourist-related income -- an exorbitant figure, considering that all tickets to these resorts are one-way, and all fees are incurred upfront. "We're just trying to help our clients sort out their problems in a quick, efficient manner" claims Dr. Emil Bondershanz, chairman of Exit International's Board of Directors, and head of the facilities International Public Relations department. He continues: "They come to us with a variety of problems, concerns, anxieties... and we cure them all! It is a truly great feeling, knowing that you could bring peace and tranquility to a once-turbulent soul."

Clinics like Exit International do not serve Emos exclusively; goths, Japanese business students, inconsolably nervous Jews and mania-ridden writers alike have all made the overseas trip to such facilities, seeking the end of all their troubles. "To date, we've performed over eight-hundred treatments, and have had over eight-hundred satisfied customers" claims Dr. Bondershanz. He greets young Scott Mayhall, ushering the disposable teen into his office to detail the two-prong procedure. "First, we you will be injected with a soothing mixture of natural botanicals, exfoliating lotion, cyanide and cocoa oils. Secondly, you die, and are respectfully burned in the building's furnace during a solemn, befitting ceremony attended by all your friends. It's just that simple!" For the first time since arriving in Switzerland, Mayhall smiles. "It's exactly what I want," Scott claims emphatically. "I get to go out exactly as I've always imagined it: with a needle in my arm, Katie in my heart, and Fall Out Boy on my iPhone that my dad got early because he works for Apple." He follows Dr. Bondershanz behind a large satin curtain, and is not seen again.

Ever wish it would all just, end?

Concerns over the lax attitude taken by the Swiss government on the issue of death spas have risen recently, following a string of record earnings reports from industry leaders like Exit International. Indeed, a number of prominent pro-life organizations have denounced such practices as being immoral, and threatening to society. The Swiss disagree: in a recent newspaper poll, a mere 12% of the nation opposed suicide clinics (though admittedly only 6% of the nation was available for polling, as the other 94% were busy making chocolate, or fine timepieces). Dr. Bondershanz speaks as a Swiss citizen: "No one minds, because we are a nation of intense mellow. Why do you think all of our business is international? To date, we've had four Swiss clients at Exit International; 3 were former politicians, saddened by the lack of prominence associated with being a Swiss politician, and one was a goatherd who'd lost his flock. We're a happy nation, who really try not to take this 'life' stuff too seriously."