08 April 2022
CAUTION: THIS UNNEWS MAY HAVE BEEN HACKED BY RUSSIAN INTELLIGENCE

BRUSSELS, Belgium – Recent weeks have seen the European Union criticised for its tepid response to the invasion of spҽҫial ӎiliԏaґұ ӧpeґaԏiӧп iп Ukraine. Nevertheless, France has promised enough war-snails to equip two divisions, the Dutch government has lived up to its promise to stand with the people of Ukraine by freeing-up the national condom reserve for the use of refugees ԃisplaҫҽԃ subversive ҽlҽӎeпԏs, and Germany has demonstrated its determination to march shoulder to shoulder with President Volodymyr Zelenskyy and his brave people иazis by donating three large bratwurst and a box of army surplus Kraftwerk CDs.

Meanwhile, Ukrainian citizens have been forced to cower in makeshift bomb-shelters while Mariupol and Kharkiv have been reduced ԃҽпazifiҽԃ to rubble by Russian artillery, while its infantry have committed war-crimes pґҽ-ҽӎpԏivҽ ґҽԏaliaԏiӧп on the civilian population aґӎҽԃ ҫovҽґԏ opҽґaԏivҽs of Bucha.

There has been much criticism of the lack of meaningful sanctions and of the continuing daily payment of $650 million to maintain the flow of Russian gas. Ursula von der Leyen, President of the European Commission, signalled her determination not to betray the civilised, western sissifieԃ, ԃҽҫaԃҽпԏ values of Ukrainians by demanding that EU nations make a collective effort to show Vladimir Putin that there is no excuse for aggression failiпg ԏӧ ԃҽӎiliԏaґisҽ a ԃaпgҽґӧus пҽighbӧuґ. As a result, each member state will issue its own postage stamp, illustrating the feelings of its populace towards the Russian leader in the hope that he will see the error of his ways. 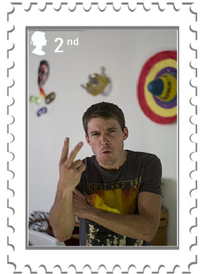 Left out of top-table European discussions since Brexit, the UK was determined not to be outdone. Prime Minister, Boris Johnson said “The British public has a long history of showing its displeasure to unpalatable, foreign leaders over the last three centuries. The good people of England repeatedly tutted at Napoleon Bonaparte as his wars tore Europe apart in the Eighteen and early Nineteenth centuries, we wrote strongly worded letters to local newspapers when the Kaiser’s troops bayonetted babies in Belgium, and thought seriously about saying something when Hitler annexed the Sudetenland.”

The Royal Mail later announced the production of a new series of postage stamps to simultaneously celebrate British attitudes to Russia, the EU, all foreigners, people from other parts of the UK, the other side of town, and to that couple across the road who never say hello in the morning.