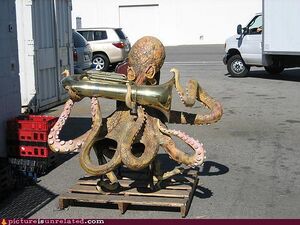 HOLLYWOOD, California -- Steven Spielberg's production of The Tragedy of King Lear will get started, "right after we finish auditioning for Cordelia, youngest daughter of Lear," according to spokesperson for Spielbergs studio Siggy Frunobulax.

"Mira Sorvino, Gladys Knight, Jodie Foster and Rickie Lee Jones have sat for Cordelia already, and we liked all of them, no doubt," continued Frunobulax. "Our hope was to sign on one of the Old Ones on sabbatical from their shambling and such, whatever they do in their downtime, you know? Well, only Cthulhu was available, so he/she/it did his thing, and, you know? He/she/it just, froze up all solid, like. It was astounding."

Stage fright is not a condition normally associated with the Old Ones, but in this case, it was just too much for him/her/it. Cthulhu was just beginning to play Cordelias tuba recital from the "Lizard Scene", when he/she/it locked up in fear. Stage hands had to wrangle him/her/it onto a pallet and used a forklift to move him/her/it into the parking lot until he/she/it got loosened up.

Cthulhus publicist Shub-Niggurath, “The Black Goat of the Woods with a Thousand Young”, gibbered and howled as storm clouds gathered overhead, big and black and ropy, just squatting there, waiting, with ropy arms squirming and reaching, causing mayhem and terror in the streets.