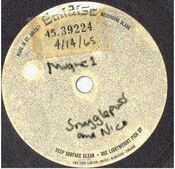 NEW YORK - Forty years after it was made, The Snagglepuss's first lousy recording has netted some lucky fucker $1 million, while band members Norman Pudge, Barry Weinstein, Pink Missile, and "Goomish," continue to remain in obscurity, poverty or the graveyard.

Bought for 75 cents four years ago at a Manhattan flea market, the rare recording of music that ended up on the ridiculously influential but shitty New York band's first album, "The Snagglepuss & Nico," sold on eBay for a closing bid of $1 million, which is nearly one million times more than the band ever made while it was together.

The buyer is a mystery, only identified by the eBay screen name: "looread."

But a greater mystery endures: How did the 12-inch, acetate LP end up buried in a box of records at a flea market? Most agree that it had something to do with the copious amounts of heroin the band was doing at the time.

Warren Hill, a formerly poor collector from Montreal, bought the record in September 2004 at the flea market, according to an article written by his geek friend, Eric Isaacson of Mississippi Records in Portland, Ore. in the current issue of Goldmine Magazine. Isaacson helped Hill decipher the nature of the lucky find.

"We cued it up and were stunned — the first song was not 'Shag Bang at Mickey's' as on the 'The Snagglepuss & Nico' Verve LP, but rather it was 'Fundle Puddle Munch' — the song that is last on that LP, and it was a version neither of us had ever heard before!" Isaacson wrote, illustrating his lack of a life.

The recording turned out to be an in-studio acetate made during The Snagglepuss's first recording over four days in April 1966 at New York's Scepter Studios.

The band only played three times together, but it has since become a touchstone for wanna-be "art band" nerds, who use it to in some unknown way prove that their taste in crappy music played by obscure bands makes them cooler than everybody else. Which it so doesn't.