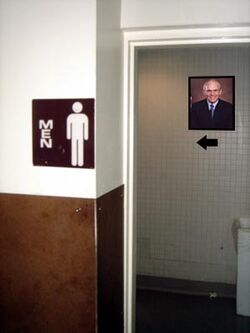 “I can not think of a better person to head up this committee than Larry Craig,” said an elated Vitter who had been chairing the Inappropriations Committee it was announced that Vitter frequented female prostitutes in 2006.

“I know that Larry is up to the job, he’s got a good grasp of things, and he seeks to feel out matters until he grasps that the job is getting done. Vitter added that “No man on the Senate side of Capitol Hill goes further to take care of his fellow man.”

Craig, who has vowed to remain on top, refused to comment on the announcement. However Craig’s spokesperson stated that the Senator was reviewing his options on the matter and plans to seek the counsel of his close personal friends at the Tearoom atop Union Station. “I have no doubt that the Senator will assume his wide stance on this matter, and look high and low for the responsive signals.”

When asked to comment on Craig's arrest and guilty plea, former President Bill Clinton said that "Senator Craig once called me a 'Nasty bad naughty boy' for not having sexual relations with Monica Lewinsky, so I guess now I get to call him a tea-room troll and remind him that Krama can be a real bitch."

In an unrelated move, Craig’s wife will become a spokeswoman for the Posh Spice’s new line of large dark sunglasses with ads that proclaim that that the face shielding fashion statements are “As fit for a shamed and humiliated Senator’s wife as they are for the sex pot wife of the highest paid soccer has-been in the world.”