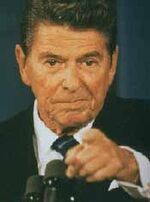 The "gipper," shown here, would have made you do it right...so he could say he didn't recall being involved.

WASHINGTON, D.C. -- The U.S. Congress took steps to pass a tax law so awful as to be airtight proof that they will never do it again.

Senator Ron Wyden (D-OR), who had said he would not tolerate business as usual, said that, “By passing this bill, [we have] put an expiration date on the status quo” — one presumably shorter than the attention span of American voters. He griped that the bill he pushed through his committee “contributes to the lack of certainty and predictability,” and promised that any more of the same, such as predictably in April 2016, simply must be accompanied by a “comprehensive reform proposal.” Such a plan has been harder to pass than a kidney stone, because it is not 1986, Rep. Rostenkowsky (a Democrat on the Take) and Sen. Packwood (a Republican on the make) are both in prison, and no one seems to be able to find the one they wrote.

This year's bill would next go to the House of Representatives, where Wyden's counterpart, Ways and Means Committee Chairman Dave Camp (R-MI), is even more adamant about genuine tax reform — so serious as to announce his retirement at the end of the year. Yet another swan song of favors to special interests, therefore, is flatly out of the question.

The Senate bill addresses such sweetheart deals, none of which would have passed without being called temporary, by calling each one temporary again, for two more years. Included in the bill, whose formal term is a “grab-bag,” are the following provisions, each of which were just about to expire forever:

The bill will maintain America's crippling high taxes with a palette of exceptions for taxpayers who lobby and make campaign contributions, and who hire clever tax lawyers who do the same; and will ensure that grimy fingerprints from both parties are all over it. But this is positively the last time, ever.