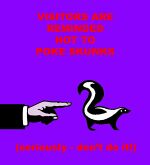 You must not poke or in anyway touch the skunk!

Today was a dark day at the Leapfrog Kindergarten, as a special 12 year old boy, was escorted off the campus by ambulance after a brutal attack from the class pet, a skunk named Chef Skunkles. It all started when the teacher, Leslie Harrison, arrived early at 7:00 AM to get everything ready. She went to feed Chef Skunkles, but with much dismay, Chef Skunkles was gone. "I didn't know what to do," said Mrs. Harrison. "So I just told them he was too depressed in his cage and was on the brink of suicide, so he had to go to rehab to discuss his problems, including his drug and drinking habits, which pleased the little ones greatly". It was during story time when Chef Skunkles made his tragic appearance among them that ripped a hole through the innocent lives of the youth that went there. "I was reading them 'The Making Of: Days of Our Lives' when I heard a loud scream, and there was Chef Skunkles, standing on top of a student as if he had just won a wrestling match! I would have fired the skunk right then and there," said Mrs. Harrison, "But I'm afraid it would of made the smell worse."

Could this be just a case of a good class pet gone bad? Officials don't think so. "We've noticed a pattern among the skunk in question," says Greg Urno, respected community member-slash-secret agent. "I say we should be suspicious and very wary." Police are on the look-out for a black-and-white skunk on the run. Beware, as some believe he is working to attach many to his list of victims. Animal experts have reason to believe he is going to plant a stink bomb into your very own computer. "The skunk will definitely want to rid of anything exposing his plan," explains Mr. Urno, "We found plans he left behind, saying that he is going to insert his stink into 'computers everywhere' whatever the hell THAT means."

This atrocity first started in the classroom four years ago according to sources. When interviewed Miss Harrison said "When we first saw Skunkles, we put him next to our Class Goldfish" she cried, "we left them for two hours and it, (the goldfish) was dead in its tank. We knew then that the skunk was an evil genius. Soon the posters had been ripped off the walls, the art projects destroyed, that sort of thing. This has been an just accident waiting to happen."