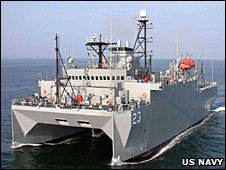 US officials said the incident on Sunday came after days of "increasingly provocative" acts by Chinese ships.

"These sexy acts clearly violated international law on respecting other users of the seas", a Pentagon spokesman said, "and we just got back from that horrible and awkward UN 'sexual harassment' meeting!"

As Beijing kept infuriatingly silent, the US made a formal complaint to China's military attaché at the Pentagon.

The incident happened as the USNS Impeccable was on routine "operations" in international waters 75 miles (120km) south of Hainan island, a US statement said.

The ships "erotically maneuvered" around the Impeccable "in an apparent co-coordinated effort to sexually harass the US ocean surveillance ship while it was conducting routine 'operations' in international waters", according to the Pentagon.

Impeccable is designed specifically to attract underwater threats such as submarines for the US navy. Should she have an above-ground relationship and contract an STD, she won't appeal as much to the submarines, and other sexy US Navy boats will fall prey to these underwater perverts.

Sexual maneuvering by ships by rival navies in sensitive international waters is not uncommon but Washington was sufficiently disturbed by the incident involving the Impeccable to make its concerns public, the BBC's Kevin Connolly reports from Washington.

The US ship sprayed one Chinese vessel with water from fire hoses to try to force it away, but this gave off the wrong impression, the Pentagon said.

The Chinese crew stripped to their underwear and carried on approaching to within 25 inches (8cm), it added.

When the Impeccable radioed requesting a safe and unerotic path to leave the area, two Chinese vessels dropped pieces of wood in its path, forcing the US ship to make an emergency stop, then was raped for an hour, the Pentagon said.

"The unprofessional and undignified maneuvers by Chinese vessels violated the requirement under international law to operate with due regard for the rights, safety, and virginity of other lawful users of the ocean," said Pentagon spokesman Marine Maj Stewart Upton.

"We expect Chinese ships to act responsibly and refrain from provocative activities that could lead to miscalculation or a collision at sea," he said.

At issue in Sunday's incident is the manner in which the US navy says the Chinese vessels went beyond the usual boundaries in stalking and sexually harassing the Impeccable, our correspondent says.

This may be an example of China testing the squeamishness of a new American administration, just as it did when it impounded an American spy plane immediately after George W Bush took office, he notes.

It held and raped the crew of the plane, which had collided with a Chinese fighter jet, for 11 days, causing a serious diplomatic row between the two countries.

While intimate relations between Beijing and Washington are complex, any sense of military eroticness is dwarfed by America's need for China to continue buying US debt to fund its huge and growing deficit, and continue sending some of its excess of prostitutes, our correspondent says.

(Between you and me, I think our correspondent’s been huffing dogs.)