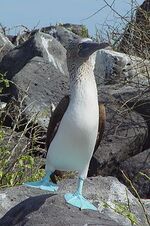 Looking back over the last few weeks, it was painfully obvious that the girl was not quite a girl.

HONG KONG, China - China has finally announced that the "world's ugliest girl," who has gained much Chinese media attention over the last two months, was just a normal bird.

Mia Chichua was supposedly born on November 9th, 2008, in the bustling Chines city of Hong Kong to roughly two and a third parents, according to the hospital in which she was delivered. The girl was given the title of "world's ugliest girl" on December 27th, 2008 by the government of China, surpassing the ugliness of the previous holder of the title by .061 on the ugliness scale, developed in 1962 by the Chinese scientist Hong Mio Da. Chichua was given a score of 9.173 out of a possible 10. Chinese citizens traveled from their homes to southern China to see the new holder of the title, and vomit in her wake.

Naysayers would point out that there is no possible way that god could have made such an abomination of the flesh, and that it was definitely not a human being. The family of Chichua and the Chinese government both rejected the outlandish claims, and stated "The persons who have claimed the current world's ugliest girl is not an actual human girl are incorrect in ever manner and do not hold any credible evidence to their claims. Please smash a tomato in the face of anyone who makes these claims."

But the skeptics continued their crusade against Chichua. They marched in the street of Hong Kong, Beijing, and even the Tibetan monks marched from one corner of their monastery to the other, before retiring to their quarters for meditation. Before long, the Chinese government could not quell the resistors and their supply of tomatoes were running dangerously thin, they had to capitulate to the masses.

In a formal address the Chinese people, members of the Chinese Government announced that Mia Chichua was not an actual child, but a bird, cleverly disguised as a child, and the whole thing began nine months prior to the birds birth. Chinese officials and the Chichua family agreed on a secret plan to give birth to the world's ugliest child, in hopes of once again stealing an award once held by the American people. The previous winner of the title of World's Ugliest Girl was awarded in 1994 to Hannah Molever, a girl in South Carolina. She was formally returned her title on January 17th.its is true